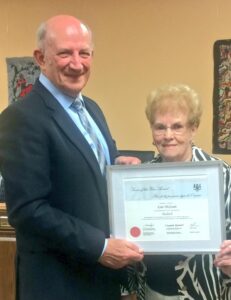 ABERFOYLE – “Puslinch is very fortunate to have a resident such as Lois McLean who demonstrates, in many facets, an inspiring passion for community enrichment and preserving the history of the township,” said Mayor Dennis Lever on June 17 as he presented McLean with the 2015 Senior of the Year Award.

Lever said, “a long-time supporter of the community, McLean began giving back by taking on the role of scorekeeper for the Badenoch Baseball Club.”

Later, McLean was a director for the Aberfoyle Fall Fair for a number of years and has served as secretary-treasurer for the Badenoch Community Centre.