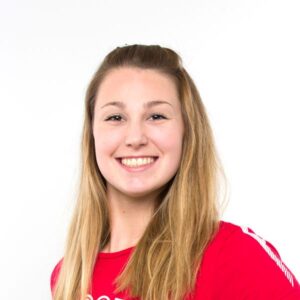 Samantha Nealon was born and raised in Morriston where her family still resides. She attended Aberfoyle Public School and now is competing in the Pan Am Games as part of Team Canada’s Synchronized Swimming Team.

Her amazing journey started when she watched the Beijing Olympics in 2008 and knew then that she wanted to swim for Canada.

At the age of eight Samantha started synchronized swimming recreationally in Guelph while she was still attending Aberfoyle Public School where she stayed until grade 5. Margaret Hauwert, her 2nd grade teacher remembers: “Samantha was a quiet but determined young girl. Always smiling and pleasant. She developed a drive to not only succeed, but to stick to what she wanted. Getting along with others was very easy for her so I’m sure her coaches enjoy working with her as well. Good for her.”

In grade 6 she transferred to Hollycrest Middle School and trained with the Etobicoke Synchronized Swimming Club. This is where her incredible story begins.

Her mother Caroline would drive her to Etobicoke from Morriston every day for her 7am training and then pick her up from school at 3:30pm. That’s two round trips each day. There were no HOV lanes then so just think how many hours on the road that would be.

Commitment and devotion were values engraved in this family. Samantha would train from 7am to 12pm three to four times a week and then go on to attend a high performance program at school for three hours.

Pretty amazing. But wait. The strong commitment to this quest didn’t stop there.

In grade 10, Samantha went on to train at the Granite Club on the east side of Toronto. There her coach was Sheilagh Croxon, one of this country’s top synchronized swimming coaches who led the Canadian team to a silver medal finish at the 1996 Olympics in Atlanta.

Samantha attended Silverthorn Collegiate where she completed her high school career. While speaking with Samantha I thought she must have moved to Toronto when she transferred to this school.

But the family stayed in Morriston and Caroline continued to drive Samantha twice a day to North York. It’s no wonder that Samantha’s favourite motto is “No pain. No gain.”

And gain she did because next week she will compete for Canada in both the synchronized swimming team technical event and the team freestyle.

Let’s show this courageous and talented young woman from Puslinch how proud we are of her and cheer her on July 9 and July 11 when she competes, not only for Canada, but for her hometown of Puslinch and the family that has so surely and devotedly raised her to be the athlete she is today.