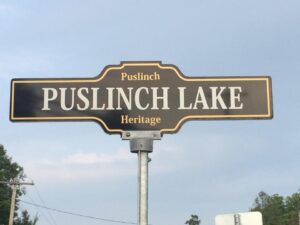 PUSLINCH LAKE — The lakeside scene beyond Art Zymerman’s dock looks like it was pulled from a postcard. But beneath the water’s surface, there’s a war going on.

Residents of Puslinch Lake have been fighting for years against an invasive species of weed called Eurasian water milfoil, and chronic sediment problems that have clogged their beloved lake and threatened to turn it into a swamp.

This month, they resumed a privately funded dredging project pulling an average of about 300 tonnes of mud out of the lake every day, their latest plan of attack that is costing them around $130,000 a year.

So far, the dredging, combined with annual chemical treatments, seems to be working. Using a barge manoeuvred by a tugboat, an excavator has been digging out the lake’s silty bottom, and hauling the sediment to shore where it’s trucked to dry in a nearby field…