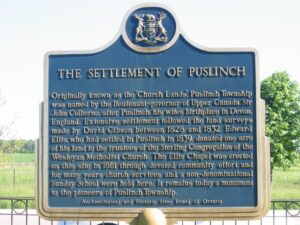 What a puzzling name! Strangers are bewildered about how to pronounce it. The following example of the difficulty caused by our township’s name is from Oct. 18, 1958:

“Puslinch Township gave an Ontario Municipal Board hearing in Guelph lots of trouble on Friday. Nobody knew how to pronounce it. Counsel R. B. Robinson made a few tries – none of them right – and then turned to the crowd in the gallery and asked: “Just how do we pronounce this? Is it PUZLYNCH or PUUSSLINCH?” From the bench, Board Member C. F. Nunn gave the lawyers the right pronunciation of PUSHLINCH. The next witness to take the stand referred to the township as PEWSLINK.”

Pronounced “Puss Lynch”, again and again, through the years, the question comes up, “How did it get that name?”

Some have supposed Puslinch to have been a First Nations word and others have speculated that it was linked to the early settlers. An old story circulated that the name had its birth in an experience of some pioneers, when a wagon became mired in swampy land and someone yelled to one of the men helping to free it, “Push Lynch!” Another similar version related that, at a barn raising, a log stuck halfway up and the corner-man shouted to John O’Lynch, “Push Lynch!”

David Stirton searched the surveyor’s records in the Crown Lands Department in a fruitless attempt to ferret out the origin of the name. In response to David Stirton’s queries, William Halley of the Vindicator, a newspaper published in Chicago, postulated another theory. A man whose relatives had resided in Puslinch, he wrote that he thought the word was the name of one of the Directors of the Canada Company.

“I know that the names of some of the directors of the Canada Company were given to the townships of Perth and in all probability, Puslinch got its name from the same source.”

Eventually, David Stirton learned that Puslinch in Devonshire, England had a link to Victorian writer, Charlotte Mary Yonge, 1823-1901, whose prolific writings covered the fields of fiction, history, biography, botany, religious instruction, children’s stories and belles letters but he could make no further association.

A writer for the Guelph newspaper drew a connection in 1876. He wrote that an academic, Dr. Scadding, had presented a paper about Yonge and Dundas Streets and the men after which they were named, before the Canadian Institute in Toronto. Yonge Street was named by Governor Simcoe to honour Sir George Yonge, whose ancestral home was Puslinch Manor in Devonshire. The writer assumed that Puslinch Township in Wellington County had been named as a further memorial to Sir George Yonge.

It was Kate Conway, co-author with David Stirton, who gave the correct explanation in 1899. During his time as Lieutenant-Governor of Upper Canada (now Ontario), 1829 to 1836, Sir John Colborne and his wife, who was Elizabeth Yonge, visited in Toronto, with the Commissioner of Crown Lands, Peter Robinson. In the course of conversation, the Commissioner mentioned that he had difficulty in naming a new township and he wished that some of the ladies would furnish a suitable name. Lady Colborne was appealed to as the most prominent lady present and she replied,

“Why not give it the name of our family estate in South Devon, the place in which I was born?”

The Commissioner enquired what the name might be and the township was forthwith named Puslinch.

As to the meaning of the word, Puslinch resident, Mrs. Frank Ferguson gave local History columnist, Earl Werstine, an explanation. She and her husband visited South Devonshire in 1960. A librarian showed them an article about the origin of the name, which stated that it came from an Anglo-Saxon word spelled “pusslynch” or “puislych”, meaning “hill of peas”. Mrs. Ferguson commented that she was reminded of that interpretation every year, when her neighbour, Gordon Bridgeman, planted and harvested his peas.

First published in The Puslinch Pioneer, 2012.
Re-Printed by permission of Marjorie Clark.