This is the fourth in our back To School series to run through the month of August.


Sharon and Terry Burr are local beekeepers here in Puslinch. You may know them from their honey products, The Burr’s and the Bees. Their son Dr. Jamie Burr started his new job at the University of Guelph this Monday. This is his cross Canada story of how he got there, and it starts after graduating from Aberfoyle Public School. 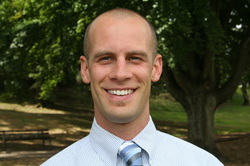 While attending Centennial High School, he spent his summers as a camp counsellor. A precursor to his affinity for sports and the outdoors.

He studied kinesiology at Western University where he was involved in varsity sports as captain of the water polo team. One summer between semesters he felt he needed a change and went to be camp director at the YMCA Camp Thunderbird in Victoria B.C.

He also met the love of his life, Cassandra, at Western and when they graduated the call of the west beckoned to them, and they ended up in Whistler where they spent the winter skiing to their hearts content. As Jamie told me they were “Ski Bums.”

When the snow melted the natural course of life was to then pitch a tent in Tofino on Vancouver Island. They continued to surf away the summer, later going back to the Camp Thunderbird to volunteer.

It was at that point that Jamie had a profound moment. He realized he needed to find something more meaningful to do with his life, so he did some research and started cold calling schools to find his own calling.

It was after the deadline to apply for the upcoming semester so the prospects were actually dim. But fate stepped in and led him to contact Dr. Norman Gledhill, a professor at York University in charge of the Cardio-Respiratory Exercise Physiology program.

I took a break here to ask him what that was. The best way to explain it is that the program looks at the ways the heart and lungs work together and affect fitness.

Professor Gledhill took an interest in Jamie’s plight and he happened to have a student in his Masters program who attended Western at the same time as Jamie. Ah, serendipity. He asked her if should take him on and her answer must have been a glowing yes.

Because it inspired Professor Gledhill to call Jamie on a weekend and told him that despite the deadline having passed, to be in his office (in Toronto) on Tuesday morning. What he didn’t know was that Jamie was in Victoria. As far away as he could be in Canada from his appointed date with the professor.

Jamie and Cassandra jumped in the car and proceeded across Canada and made it on time for the interview.

He was told to not wear jeans and a t-shirt, so Jamie assumed, as most people would, that he should dress appropriately, so he showed up all polished up in a suit and tie. What he didn’t know is that Professor Gledhill was running an exercise lab that day and his modus operandi was to throw his applicants into the ring to prove themselves as part of the interview.

Jamie passed with flying colours. He must have to impress this discerning professor, even after the deadline to apply.

He earned his Masters and PhD at York University and while he was there he worked with firefighters, corrections officers, Olympians and NHL athletes.

He would frequently test the Toronto Maple Leafs and Montreal Canadiens as well as the top 100 NHL draft picks every year. He recalls a session where there were four NHLers and one of Canada’s top male figure skaters.

The NHL guys apparently thought themselves supreme and were snickering about the figure skater. I’m assuming it was all in good fun. During the jump test the figure skater wiped the floor with the hockey players, putting them to shame. The boys shut up quickly after that!

In 2007 Jamie married his sweetheart Cassandra who had supported him in this journey all the way. After receiving his PhD at York, Jamie and Cassandra picked up and moved back to B.C. where Jamie did his post-doctoral fellowship at the University of British Columbia in Kinesiology and Experimental Medicine in the Cardiovascular Physiology and Rehabilitation Laboratory.

When his studies were done at UBC he was offered a job at the University of Prince Edward Island where they were launching a brand new Kinesiology program. This was a great opportunity as he was the second professor on board and had a chance to have his own input and create the program.

This week Jamie started his job as professor at the University of Guelph where he will be working with some of Canada’s best Olympic runners to push the boundaries (legally) for performance excellence.

We welcome Jamie back to his hometown and wish him well. It’s been a great journey from coast to coast.

I asked him if he ever helped his Mom and Dad with the beekeeping when he was young. He said he did and added that he figures “he helped less than he probably thought he did at the time.”

I’m sure Sharon and Terry don’t really mind that he didn’t end up following in the family’s beekeeping footsteps. Being a part of Olympic history isn’t a bad vocation. And having Jamie, Cassandra and their three grandchildren back home is a bonus.