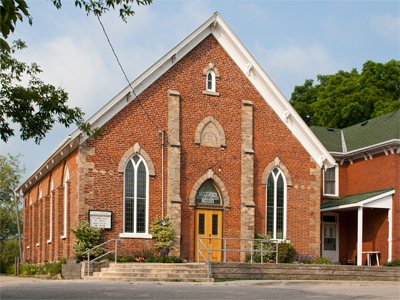 
HISTORY OF THE MORRISTON CHURCH 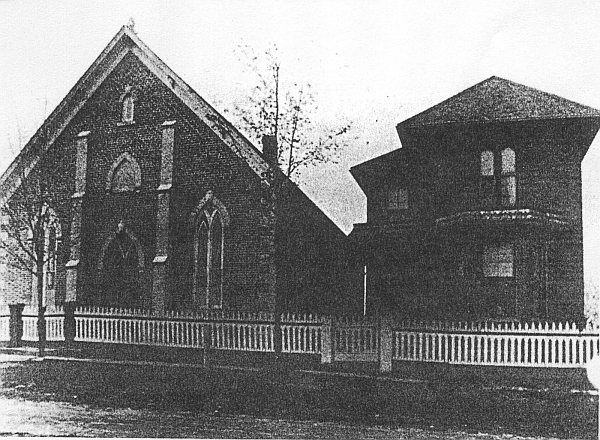 On May 13, 1840, Joseph Harlacher, a missionary from Pennsylvania, came to visit friends at the Nicholas Beaver home. Word spread and neighbours gathered for a “preaching service”. In October of that year the first well attended meeting was held in the John Calfas home. The Church was known as the Evangelical Association and later as the Evangelical Church.

After several years of meeting in homes, a log church The Evangelical German Chapel, was built on the west side of Brock Road (now #6 highway) in the middle of the village block. In 1856 a red brick church was built on its present site. The church was served by circuit riders covering a large area and appointing a class leader to provide spiritual guidance in his absence.

In 1880 the building was enlarged. The first parsonage was built before 1880. It was a log and frame building. Part of that building later formed the church vestry and was renovated in 1978 for a study room for the minister, and is currently the choir room with a storage office above. The other end formed the utility room at the rear of the present manse which was built in 1894. However, an addition was built on the rear of the manse in 1985. Services were held in German until 1917.

In 1946 The Church of the United Brethren in Christ and The Evangelical Church joined and formed The Evangelical United Brethren Church (EUB). Both shared similar doctrine and like the early Methodists, valued simple and honest lifestyles. They opposed gambling and slavery and were advocates for peace. Tobacco and alcohol were prohibited. In 1952 a basement was dug out from under the church. A major undertaking! Sunday School, Christian Endeavors Youth Group Meetings, Church Socials, Brownies and CGIT now had the much needed space. 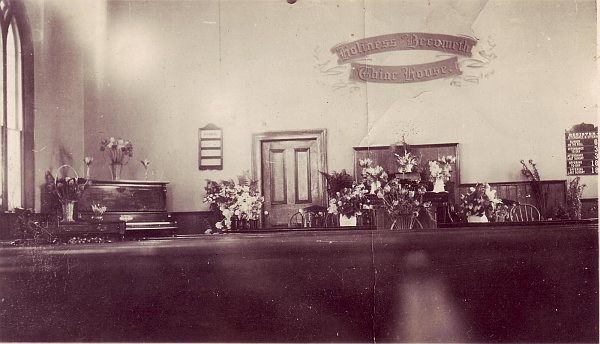 The dedication service after the basement project was complete in 1952.


HISTORY OF THE ABERFOYLE CHURCH 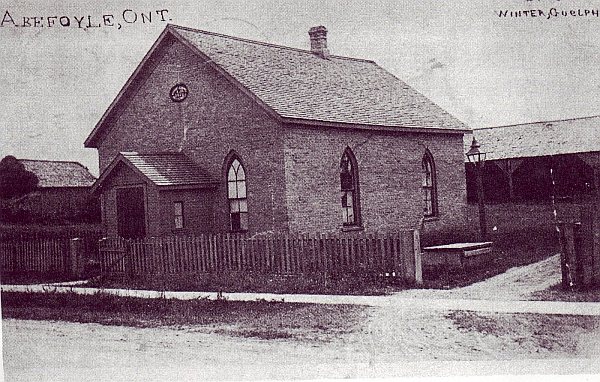 The first service of the newly formed Methodist Episcopal Church was held in the Council Chambers of the Township Hall on November 19, 1876, with 15 members present. On October 9, 1877 a parcel of land was purchased on the west side of Brock Road in Aberfoyle and in just ten weeks the church was built. On December 30, 1877 there was a dedication service. An oval board with the inscription Mt. Carmel was placed in the church.

Aberfoyle was first part of a circuit with area churches. In 1925 after Church Union, the Aberfoyle Church became a member of The United Church of Canada. Aberfoyle was first on its own and then part of a 3 point charge with Freelton and Strabane. In July 1927 the old building was taken down and a new one built.

The Evangelical United Brethren joined with The United Church of Canada effective January 1, 1968. Before long Aberfoyle United and Morriston United churches became a 2 point charge, with joint services in the summer.

In 1975 the two congregations amalgamated and formed Mount Carmel-Zion United Church. Services were held in the Aberfoyle Church during July and on special occasions such as a Hymn Sing and Dessert Party and in Morriston the rest of the year. The Aberfoyle UCW continued until 1986.

In 1987 the Aberfoyle Church was sold and a De-Consecration and Remembrance was held. Some of the furnishings were incorporated into the Morriston Church, such as the oak pews which are in the choir loft. The rest of the furnishings were sold. The Aberfoyle Church was beautifully renovated into a residence, then into an antique shop with apartments and is currently the charming location of Abbey Interiors & Boutique. In 1988 our beautiful pipe organ was installed. In 1993 Anna Bill generously donated her home, Marburg House to the church, and when Anna moved to a nursing home in 2003 the home was rented. The Church continued to provide active programs in addition to Sunday School and Youth Groups, including Care Givers and Tots and Messengers.

Both the Church and Manse received plaques for Historical and Architectural Significance in 2000.

MCZUC is very much involved in Mission Work both local and global. Our Prayer Shawl ministry began in 2006 and provides shawls for comfort and celebrations. We share in the Ministry of Community Services such as Remembrance Day, Good Friday, World Day of Prayer and Vacation Bible School. For over 25 years we have offered Community Seniors Luncheon Programs. This expanding program moved to the Puslinch Community Centre to provide better accessibility and parking. Our popular Harvest and Holly Bazaar is held on the second Saturday of November at the Puslinch Community Centre. We also host a Community Breakfast with Santa. We offer Meaningful Worship Services, Choir, Children’s Activities, Prayer Shawl Gatherings, Study Groups, Special Services and Fellowship throughout the year. Our Ways and Means Groups raises funds by providing catering services for community functions, wedding and parties.

We are very pleased to hear that ancestors of some of the early settlers and founders of our church will be traveling from near and far to gather with the local community to celebrate the 175th Anniversary. We do hope to see you there!

Mission Statement – developed in 1993
Mount Carmel-Zion United Church, together with God and the Word, aims to provide a caring community where everyone is welcome, where people of all ages can worship, enjoy fellowship, study and grow in faith and in ministry.