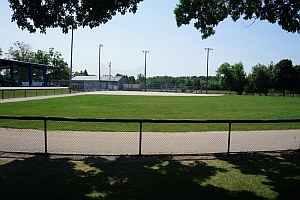 This weekend was the first time the Kodiaks played in the Ontario Challenge Cup. This tournament is filled with good teams. The only way to qualify for the tournament is to be one of the top teams in your respective leagues.

It was a tough weekend for the Kodiaks as they lost their first two games and were the eliminated from the tournament. The competition was in line with what the Kodiaks were used to, but they could not get any offence going.

They lost their first game to the Sweaburg Crush, 8-0. One bad inning cost the Kodiaks 5 runs, and they were unable to get any back.

The second game they lost to the Oshweeken Red Men. Once again the Kodiaks could not hit the ball, losing 7-0.

Monday night they will try to get things back in order as they play against the Hamilton Pirates in another playoff game. Game time is 8:30pm in Aberfoyle.