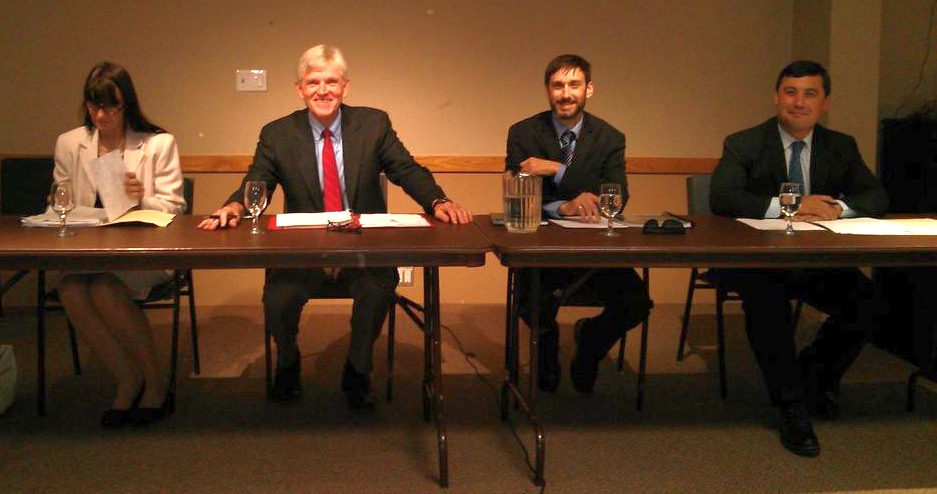 Last night was the 2015 Federal Election All Candidates Meeting in Puslinch sponsored by the Optimists. It was held at the Puslinch Community Centre and I’m sorry to say was pretty poorly attended. Whether this low attendance was simply because of a lack of awareness for the meeting or perhaps a general disinterest in the election as a whole I cannot say – but I was disappointed not to see more people there. This was more than likely our best opportunity to view each candidate up close and see their personalities, mannerisms and abilities first hand.

After a five minute prepared statement from each candidate the floor was opened up to the public to ask questions for about an hour and a half and then each candidate was then given a couple of minutes to address the audience with their closing statements.

Questions from the audience were, for the most part, coherent with the occasional rambling statements we’ve come to expect at open mic political forums (Mr. McKay, who emceed the night did a fairly good job at moving the questioners along). Questions from the public included the following topics: National Pharmacare, Senate Reform, Environmental Issues, Tax Increases, Party Affiliations, Bill C-51 and HealthCare funding. As you can see, a wide range of topics was addressed.

I won’t bore you with the answers given by the candidates, most of their positions are well known and I dont think there was any great revelations worth printing. What I will do is give you my opinion of the speakers and how they handled themselves.

For my money there was very little difference between the candidates when they were reading their prepared opening statements. All were coherent and well spoken, although it was quite obvious that some had more experience in public speaking than others (but lets face it – getting up in front of crowd is not an easy thing to do and all the candidates should be applauded for putting themselves out there and doing this).

Where the real difference came, in my opinion was in the way the candidates handled themselves during the non-scripted question answering sessions. Far and away, in my opinion, the two best speakers of the night were Brent Bouteiller of the Green Party and Michael Chong of the Conservatives. They not only knew their facts and figures but demonstrated a good understanding of the procedures and policies that would be needed to accomplish tasks in a government setting. I also felt that neither of these two dodged questions, even when they knew the answer they were giving may not be what the person asking the question was looking for. To me, this is what I’m looking for in someone I will vote for. Mr. Chong was clearly defining where he agreed and disagreed with the national party and Mr. Bouteiller was very coherent in explaining why he supported his party leader and policies.

As for the other two candidates…

I felt Mr. Trant (Liberal) was simply regurgitating a lot of talking points handed down from above (many repeated what felt like multiple times throughout the night). His attempt at theatrics (standing up and saying something to the effect of “I have to stand up because I can’t take this sitting down”) felt extremely rehearsed and I got the feeling he does that bit at every meeting he attends. Overall he spoke well but didn’t feel very genuine to me.

On the other hand Anne Gajerski-Cauley, the NDP candidate couldn’t have been more different than Mr. Trant when she spoke. Her rambling, almost incoherent answers to some of the questions had me consistently feeling like she forgot what question she was asked – although some of her answers did elicit genuine applause from the audience so she was definitely striking a chord with some. She is obviously very passionate about the causes she believes in.

I wish more would have attended this meeting but I understand why most cannot. I do hope, however, that my ramblings here won’t affect anyone’s vote. I hope everyone does the research for themselves and, most importantly, gets out and votes on October 19th. Big thanks go out the the Puslinch Optimists for hosting this event.