At last Wednesdays Puslinch Council meeting a great deal of time was spent hearing from delegations regarding the changes that may be coming to the Niska Rd Bailey bridge. If you are unfamiliar with the area, the bridge crosses the Speed River on Niska Road between Whitelaw Road and Pioneer Trail. The bridge is unique in the area as it is a single lane Bailey Bridge that connects to a two lane road on both ends (see bottom of article for more information on Bailey Bridges). First up were Mr. Don Kudo, Deputy City Engineering/Manager, Infrastructure Services and Mr. Philip Rowe from R.J. Burnside and Associates presenting an update on the City of Guelph Niska Road Environmental Assessment. The pair stated that so far there have been two public information sessions and they have received hundreds of comments and suggestions from the public including concerns about speed on Niska Rd. and an appetite to preserve the heritage of the bridge, the community and the viewscape.

The comments from Mr Kudo and Mr Rowe did not seem to reassuring to those opposed to replacing the current structure with a two lane bridge. They made it clear that the current preferred solution was to reconstruct Niska Road with a full two lane bridge. Reasons cited include:


There were a couple of recommendations the pair discussed that would go along with the construction of a new two lane bridge. The existing bridge abutments are supporting wildlife in the water and both the GRCA and Guelph Heritage would like them left in place for both aesthetic reasons and to maintain the fish habitat. They also mentioned that a kayak/canoe launch area would be created at the Southwest corner of the bridge to provide access to the river.

After their presentations a few questions were asked of them from Puslinch Councillors and Mayor Lever. Councillor Roth asked what the expected traffic increase would be on the road after a two lane bridge was build (A: 30%). Councillor Stokely asked when a new home could be found for the old one lane bridge (A: That isn’t part of the Environmental Assessment Process).

Mayor Lever inquired whether there was any plan to extend Stone Road (A: No) and whether this road construction would have any long term conflict with the Hanlon (A: No Conflict). Mayor Lever also made several statements to indicate that Puslinch has not expressed any intention of upgrading it’s portion of Niska Road and wants to ensure that Pioneer Trail does not become a conduit to the Guelph south end business park. He stated that although the bridge itself is NOT in Puslinch, we are concerned about the impact of additional traffic on our roads.

After this official delegation was completed there were seven delegations made by many concerned local residents – every one of which was opposed to the widening of the bridge to two lanes. Some of their concerns included:


The delegates were very well spoken and obviously very passionate about their cause and they were well received by Puslinch Council. A group has organized a public meeting on this issue on October 27th entitled “Speak Up For The Speed – Town Hall Meeting re: Niska Bridge”. Click here for more information.

More information on the City of Guelph’s Environmental Assessment for this project can be found by clicking here.


Background: What is a Bailey Bridge 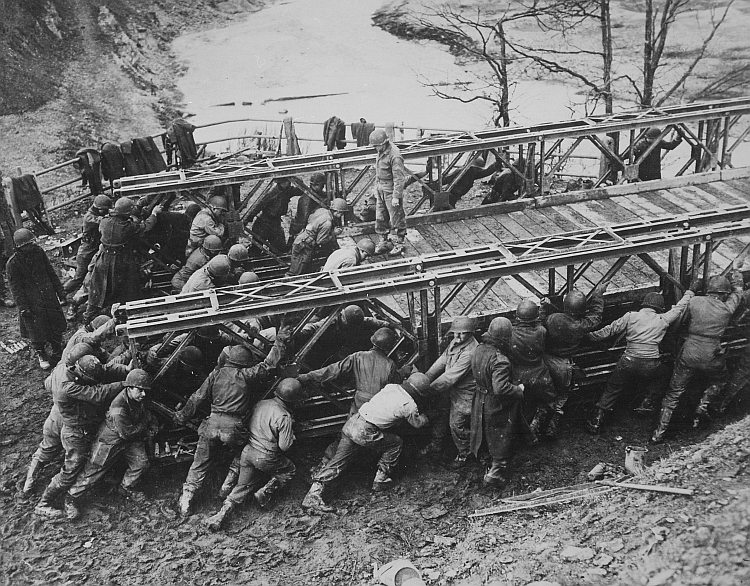 US troops launching a Bailey bridge across a gap by hand

What exactly is a Bailey Bridge and why were they important? (From Wikipedia)

The Bailey bridge is a type of portable, pre-fabricated, truss bridge. It was developed by the British during World War II for military use and saw extensive use by British, Canadian and the American military engineering units.

A Bailey bridge had the advantages of requiring no special tools or heavy equipment to assemble. The wood and steel bridge elements were small and light enough to be carried in trucks and lifted into place by hand, without requiring the use of a crane. The bridges were strong enough to carry tanks. Bailey bridges continue to be extensively used in civil engineering construction projects and to provide temporary crossings for foot and vehicle traffic.

The Bailey Bridge provided an excellent solution to the problem of German and Italian armies destroying bridges as they retreated. By the end of the war, the US Fifth Army and British 8th Army had built over 3,000 Bailey bridges in Sicily and Italy alone, totaling over 55 miles (89 km) of bridge, at an average length of 100 feet (30 m). One Bailey, built to replace the Sangro River bridge in Italy, spanned 1,126 feet (343 m). Another on the Chindwin River in Burma, spanned 1,154 feet (352 m).