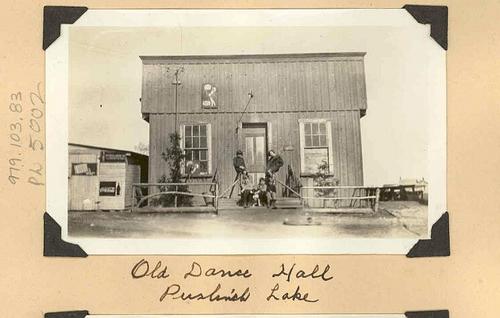 
The hotel at Puslinch Lake was, for a long time, a place for dancing but its heyday for this activity was in the 1930’s. Stories have since circulated that Guy Lombardo and his Royal Canadians played at the Lake. Although no evidence could be found to support that claim, it was possible to find the names of other bands, which played there.

The grand opening of the new dance pavilion, built during 1927 at a cost of $5,000 to the City of Guelph, owner of the resort at the time, was held on Thursday, May 24, 1928. Fair Pearse and his orchestra played for dances in both the afternoon and the evening to capacity crowds, with many people unable to get in. The hotel hall was draped in some 6,000 coloured streamers for the event.

That was its official opening. It was completed in the fall of 1927, however and dances were held in the new pavilion from late September 1927. Bruce McMillan’s orchestra played on September 30, the second evening.

In early August 1927, the Guelph City Council voted to build the combined boathouse/dance hall at the Lakeview Inn and work was started at once. The structure hung over the water, with the boathouse and change rooms for swimmers below and the dance hall above. As well as the dance floor, there was a refreshment booth, ladies’ cloakroom and a smoking room for the gentlemen. The entire building was surrounded with a verandah, accessed by French doors. In a move calculated to economize, instead of installing a new floor, the dance floor from the previous building was jacked up and moved onto the new foundation. The orchestra platform was in the centre of the room. The structure was finished with stucco. The previous dance hall was revamped into lavatories. In June 1928, the hotel on the property was re-wired. 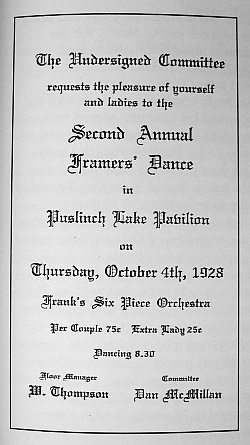 In his book, Let’s Dance: A Celebration of Ontario’s Dance Halls and Summer Dance Pavilions, Peter Young quoted Frank A. Smith, who said that, on Friday and Saturday evenings, women wore long gowns and men dressed in suits. He recalled Merv Himes and his orchestra.

Fair Pearse was engaged to play on Monday, Wednesday and Friday evenings throughout the summer of 1928. Franks’ Orchestra of Nassagaweya Township played for an “old time” dance on Thursday evenings. According to Peter Young’s book, the Franks began in their Nassagaweya locality and progressed to a weekly radio programme on CKOC in Hamilton in 1931, which led to engagements in more distant centres in Southern Ontario. The advertising poster shown below is from the book, The Bands Played On, Music and the Frank Family published in 1995 by Jean (née Frank) Somerville, eldest daughter of Andy Frank.

In mid-May, the opening dance of the 1929 season featured Jack Slater and the Canadian Aces, a 9-piece orchestra with a singing trio. Three hundred couples swayed under red and blue spotlights. Norm Brotherton and his Alexander Academy Orchestra from Hamilton played May 31st. The Puslinch Lake cottagers held at dance on June 5th, with music provided by the Monarch Orchestra of Guelph. Snyder’s Orchestra played for an “old time” dance on Friday, June 14th, with admission 70 cents per couple. On June 28th, it was a return engagement of Kalani and his Orchestra of the Grange Café from Hamilton, which advertised, “Come and hear a real band.”

The United Farmers of Ontario held an old time dance in the new pavilion on Thursday, July 5th, with an attendance of 340. The Puslinch Canoe and Boat Club, its home venue at Puslinch Lake, held a weekly dance here.

The Canadian Ambassadors from Toronto supplied the music on Tuesday and Friday nights in June 1930.

In the spring of 1931, the Lake View Hotel, under the new management of J. C. Bridges, who had relocated from Edmonton, was advertising “good orchestral music each Wednesday and Friday”. The place was painted, a new hardwood floor was laid throughout the building and the rear portion of the dance pavilion was raised.

Frieland’s 10-piece Orchestra was playing Wednesday and Friday in the week of August 12, 1931; on Thursday there was an “old tyme dance” with Frank’s Orchestra; and on Saturday, “jitney dancing”. Jitney, a slang term, which came into use around 1910, referred to something done cheaply. According to Peter Young, a jitney dance was one at which tickets could be purchased inexpensively for individual dances, rather than paying a flat admission fee. After each number or set, the floor would be cleared of all dancers and those who presented a ticket would glide on for the next dance. A few fellows would be given free dance tickets in exchange for clearing the floor each time. This was popular during the 1930’s and 40’s.

By May 1932, Lakeview offered dancing every evening. A report from Saturday, June 11th said:

“Over four hundred people from Hamilton, Kitchener, Galt, Guelph and Preston attended the dance at Puslinch Lake last night, when Gene Fogarty’s Orchestra of Toronto provided excellent music. Friday night dances at the Lake have been highly popular and crowds attending the functions have been unusually large.”

The week of July 7, 1932 was the beginning of a regular Puslinch Lake camper’s and cottager’s dance to be held every Tuesday evening.

Mr. Bridges remained until March 1933, when he sold to John Walsh of Puslinch, who placed Bill Butler in charge. The dancing continued. Burn Knowles and his Country Club Orchestra were engaged for May 31 and Friday, June 2, 1933, a “return engagement by popular request”.

Admission was $1. per couple.

There was dancing to Waldron’s Orchestra on July 2, 1934. Win Philip and his Chateau Laurier Orchestra played a return engagement on a Friday in mid-July. The following evening, the Ambassador 10-piece Cuban Orchestra featured tangos and rumbas; dancing from 8:30 to 12 at an admission of 35 cents. Reg Freeland and his Collegians played for a midnight dance on Aug. 4th, from 12 to daylight, admission 40 cents and on the Aug. 6th Civic Holiday, from 9 to 1. The Ambassadors played for a “midnight dance and frolic” on Labour Day, the last midnight dance of the season.

The cottagers were still holding their dances in August 1936, when an orchestra from Galt played, following a concert. An advertisement from July 25, 1939 for “get acquainted dances”, new at Lakeview on Wednesday and Thursday nights, suggested “don your sports clothes, get out of town, get acquainted or learn to dance” to Earl Porter’s Orchestra for 25 cents.

Such was the dance band era at Puslinch Lake. The dance pavilion eventually became the Old Marina Restaurant, where the circular ridge of the dance platform was still visible in the centre of the floor. It burned to the ground on May 13, 2005.