Some years ago, our mother was walking out our lane to collect the newspaper, when a small, slow-moving animal appeared and ambled along beside her. On returning to the house, our mother asked, “What was that little animal anyway?” 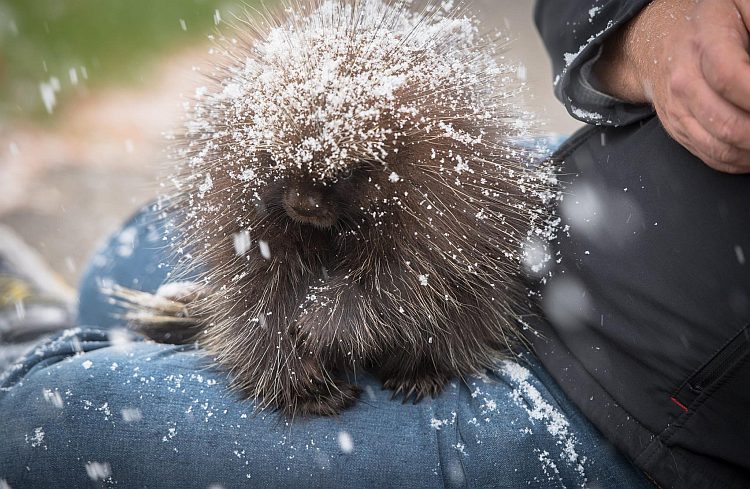 It was the peaceful porcupine, which will not bother anyone or anything, if it is not threatened. Yes, porcupines certainly do live in Puslinch, as evident by the delightful photos submitted to Puslinch Today (click here to see the original letter and photos submitted). The township has sufficient bush and swamp to provide habitat for them.

The porcupine is not dangerous,. If possible, it will run from enemies. It does not “throw” its quills but must come into contact to release them. A wise owner teaches his dog not to approach a porcupine.

When the single offspring is born each spring, its quills are soft but will harden within an hour of birth. Each animal has 30,000 quills to protect it from predators, covering every surface except the face, stomach and bottom of the feet. The quills are actually hardened hairs, which are interspersed with bristles and soft hair. First Nations women would toss blankets over the porcupine to collect its quills for use as decoration on clothing.

The porcupine is a member of the rodent family, indigenous to North America and northern South America. Its name is derived from the Latin words for pig and spine. Individuals vary considerably in size and males are larger than females. It can measure from 25 to 33 inches and weigh from 12 to 35 lbs. It has a small face, ears and eyes, short legs and a thick, small tail. Hard pads cover the bottom of its paws, which end in sharp, rounded claws, making it an excellent climber. Since it is short-sighted, it relies on its sense of smell and keen hearing.

The porcupine is a herbivore. In winter, it eats tree bark, shrubs, twigs and evergreen needles. In spring, it dines on the fresh, new grass; in summer and fall, on roots, leaves, berries, seeds, nuts and some water plants, as it is a very good swimmer. The porcupine will also chew on leather, bones or dropped deer antlers, possibly to sharpen its teeth.

The single baby nurses for about a month and is playful.

The porcupine is primarily nocturnal but will appear in daytime. It is active all year round but on stormy nights, will remain in its den, always close to a forest or swamp, in a stone pile or under a fallen log.

If attacked, it will warn with a loud chatter before swatting the predator with its tail. In Puslinch, its main predator is the coyote. However, man’s vehicles kill more porcupines, than coyotes ever do.