The Attawandaron First Nation In Puslinch

by Marjorie Clark
(Part 2 of a 3 part series)

The Attawandaron or Neutrals inhabited dozens of villages in Southwestern Ontario stretching along the north shore of Lake Erie from the Niagara Peninsula to the Detroit River, perhaps as far north as Toronto in the east and Goderich in the west.

The largest Neutral village site in Wellington County and perhaps in Ontario, covering thirteen acres, was in the Badenoch section of Puslinch, on the east side of Morriston, lot 32, concession 8. The other one situated within the Badenoch area was on lot 28, rear of concession 8, the former McPhee farm. During 1983-1988, these sites were excavated and as a result, we have knowledge of the life of the people, who lived there. 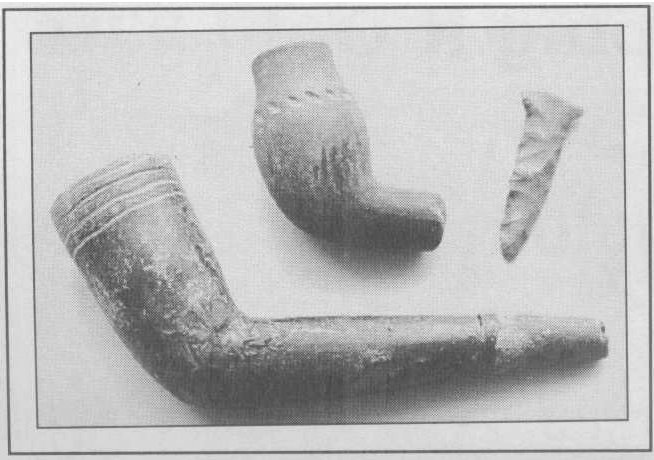 The McPhee village dates from 1500 A.D. to 1530 A.D. It was surrounded by a “palisade”, a cedar wall with stakes about 20 feet high. This kept out animals, kept it sheltered from the wind and provided protection from enemies. Families lived in longhouses, which faced the prevailing wind. Families were organized within clans and clans lived in groups. As the society was matrilineal, when a man married, he moved in with his new wife’s family.

The cedar longhouse had a packed earth floor, sleeping bunks along the sides and fires in the middle, each fire shared by two families. The roof was of cedar shingles, which were wind and watertight, except for holes over the fire pits to allow the smoke to escape and which were only covered in rain or snow storms. The fires of maple and walnut provided both cooking facilities and heat. Longhouses were sometimes enlarged two or three times to accommodate a growing family, however not in the case of the McPhee village. The largest longhouse in the McPhee village measured 125 feet long, contained 10 fire pits and was home to about 20 families of approximately 100 people. In total, the McPhee village housed from 400 to 500 individuals. The Elliot village consisted of about 40 longhouses, sheltered several thousand people and covered from five to nine acres.

This people hunted, fished and grew crops in Puslinch, choosing light soil, that was well drained, often near swamps. This is certainly true of the Elliot site. From the evidence unearthed at the McPhee site, their diet consisted of 49% venison, 17% bear, some vole and some fish, perch, pickerel and catfish. Fish were caught around Aberfoyle, in the Eramosa River, at Puslinch Lake and at Crawford Lake. When food was scarce, they ate their dogs. They cultivated corn and squash, which they made into soup, beans, sunflowers and a little tobacco. Corn was grown in the area as early as 700 A.D. They gathered wild raspberries. Medicinal herbs were garnered from their surroundings. Two percent of the bones found were human, as they occasionally ate their captured enemies.

The Attawandaron retained a neutrality between the Hurons and the Iroquois and traded with both peoples. Their flints came mainly from the mouth of the Grand River in Haldimand County.

The people were taller than the French and are estimated to have possessed about the same life expectancy. As well as dogs, bear cubs were often kept as pets.

A semi-nomadic society, the Neutrals usually be abandoned a village after about twenty years. When the game, the soil and the wood in an area became depleted, the area would be left to regenerate and the village would relocate to a new spot.

On April 2, 1984, Ken Oldridge, Project Director at the McPhee farm dig, spoke to the Puslinch Historical Society about the excavation. This information is based on his presentation that evening. More information can be obtained from the PhD thesis of William Fitzgerald, Project Supervisor of the dig, which is available at the University of Guelph, McLaughlin Library.