by Marjorie Clark
(Part 3 of a 3 part series)

The Huron First Nation called their southern neighbours “Attawandaron”, meaning “People of a slightly different language”. The French labelled those same people “Neutrals”, as they remained neutral between the Huron and Iroquois.

The Attawandaron or Neutrals inhabited dozens of villages in Southwestern Ontario stretching along the north shore of Lake Erie from the Niagara Peninsula to the Detroit River, perhaps as far north as Toronto in the east and Goderich in the west.

A semi-nomadic society, the Neutrals lived in villages, which would usually be abandoned after about twenty years. When the game, the soil and the wood in an area became depleted, the area would be left to regenerate and the village would relocate to a new spot. The largest Neutral village site in Wellington County and perhaps in Ontario, covering thirteen acres, was in the Badenoch section of Puslinch, on the east side of Morriston, lot 32, concession 8. The other one situated within the Badenoch area was on lot 28, rear of concession 8, the former McPhee farm.

In 1615-1623, some of Samuel de Champlain’s men travelled south from Midland to meet the Neutrals and in 1625-1626, Etienne Brulé spent the winter among them. A Récollet priest, Father Joseph de la Roche Daillon described them in a letter dated July 18, 1627. At the time, there were approximately 40,000 Neutrals.

In the autumn of 1650 & spring of 1651, the Iroquois tribes from the south, that is, the Mohawks, Onondaga and Seneca, armed with guns given them by the Dutch in New York State, nearly annihilated the Neutrals. Some were carried off as captives and were assimilated into the Seneca. Those who remained fell victim to diseases like smallpox and measles, which had been introduced by European emigrants or were assimilated by surrounding tribes. After that, this area was frequented by Mississauga on hunting parties. The Mississauga were still in the area after the arrival of the European settlers and our ancestors in Puslinch interacted with them.

Although they had lived in harmony with nature and did not significantly alter the landscape, the Neutral Nation left shreds of evidence of their civilization, which have and are still emerging from the earth. Throughout the years, farmers would pick up artefacts that surfaced in their fields, while ploughing. My uncle, John Clark (1908-2000), who was born and raised on a farm, adjacent to the McPhee site and who farmed across the road from it in adult life, collected arrowheads and skinning stones throughout his lifetime.

In 1982, Ken Oldridge, a teacher at John F. Ross Collegiate Institute in Guelph learned of John Clark’s collection from his student, Richard Ussher, who was John Clark’s grandson. At the time, Ken Oldridge was the Regional Vice-President of the Ontario Archaeological Society and Archaeological Conservation Representative for the Ministry of Citizenship & Culture. John showed the artefacts and the locations, where he found them, to Ken Oldridge. This created a flurry of activity and during the summers of 1983-85, digs on the sites were funded. The result was a significant enrichment of our society’s knowledge of the people, who preceded us on this land.

The 1st excavation took place on McPhee farm, owned by Raymond Reid at the time of the archaeological dig in summer 1983. A 500 year old village site, inhabited by about 1,000 people around 1500-1530 AD, was located. It covered 3½ to 4 acres. Ken Oldridge was project director and the site co-ordinator was Bill Fitzgerald, a PhD student at McGill. The dig was visited by archaeologists from the University of Toronto and the University of Guelph, some 50 members of the Ontario Archaeological Society, James Schroder, M.P. and Aberfoyle School Principal, Fred Dack and teachers. Ken Oldridge was guest speaker at one of the first meetings of the Puslinch Historical Society, held on April 2, 1984.

The Morriston or Elliot site was excavated in 1984-85. This village covered 13 acres, with 4,000 inhabitants. It existed for approximately 20 years, around 1450-1500. The village was constructed about 50 metres from a spring. The longhouses were 200 to 300 ft long, 2 ½ metres apart and appeared more structurally sound than those at the McPhee village. Bob Penrice (1906-1985), who farmed south of Morriston, had a collection, which contained a 7,000-year-old Stanley stem from the Morriston area. Ontario Hydro was forced to map a new route for its transmission towers, which had been slated to be erected through here, due to this discovery. 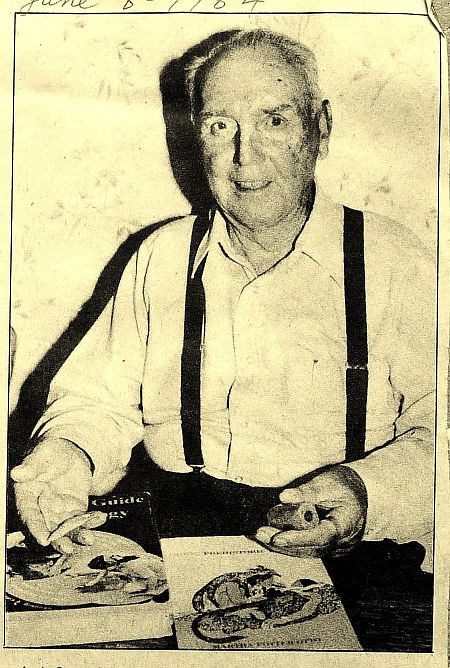 
Three sites were identified in the vicinity of Crieff. Artefacts found on lot 20, rear of the Gore, the farm belonging to Donald A. Stewart (1903-1991), indicate the sites were used in 3,000 to 5,000 BC. Andy Scott’s collection from his farm, lot 26, rear of the Gore, was one of the best collections in Wellington County, with some items dating back as far as 8,000 years. The Crieff sites were within hunting and fishing area for the Attawandaron, which probably extended as far west as Puslinch Lake, where Winfield Brewster of Hespeler reported finds. Andy Scott (1901-1984) remarked that artefacts were to be found on his and every farm for three or four miles along the 1st concession road.

Would you like to know more about the Attawandaron? “The Neutral Indians of South-Western Ontario” by Elsie McLeod Jury, is available to read in the archive of the Puslinch Historical Society, as well as information on the Puslinch sites.

PuslinchToday would like to thank Marjorie Clark for her contributions. This three part series of history articles has been extremely popular on the site and we look forward to all her future work.

This article, part 3 of this history series, was previously published in the Puslinch Pioneer, 2015 and re-printed here with permission from the author, Marjorie Clark.