The Battle of Duck Lake on March 26, 1885 is agreed to have been the opening engagement in the Northwest Rebellion and is considered to have been a victory for Louis Riel’s forces. The skirmish, which occurred around the noon hour, lasted about half an hour. It took place about a mile from the Duck Lake Settlement in Saskatchewan, at the junction of the Carlton and Prince Albert Trails.

Duck Lake is a town in the boreal forest of central Saskatchewan. It is situated north of Saskatoon and south of Prince Albert. The surrounding area was settled by Métis from Manitoba in the 1860’s and 1870’s. Louis Riel established his new Provisional Government of Saskatchewan on March 19, 1885, as a result of failure by the Canadian government to address Métis claims for rights to land, amidst the encroaching settlement in the west. 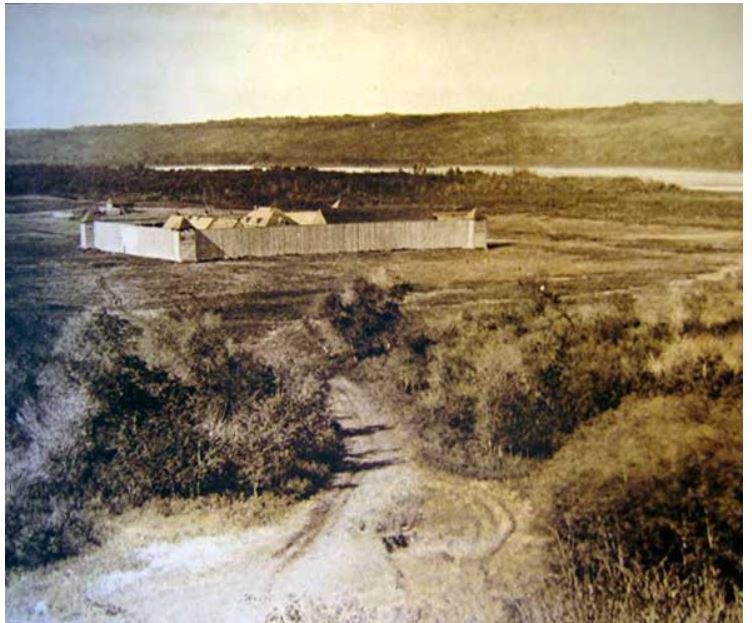 Although a half-hearted attempt to negotiate was made, the interchange was rife with suspicion and distrust and shooting broke out. The Métis and Cree force was more numerous and held an advantageous battle position. The cannon was disabled by mistaken procedure. Twelve Canadian forces members were killed and eleven seriously injured. Five Métis warriors were killed.

The Prince Albert Volunteers suffered the heaviest losses. Of the forty-two Volunteers, nine were killed. Constable Robert Middleton was one of the nine. Their bodies were retrieved by the citizens of Prince Albert and buried in St. Mary`s Anglican Cemetery in Prince Albert.

The following article appeared in the Guelph newspaper on Tuesday, May 5, 1885, entitled `Robert Middleton’s Death`.

The death of Robert Middleton in the Duck Lake fight has been confirmed by a letter from a bosom friend of the deceased young man, who lived at Prince Albert, to his parents in Puslinch. Further doubt as to the identity of the Robert Middleton, who was killed, is also removed by this letter. The painful suspense in which the family was placed at first to know whether it was their son and brother, who had fallen, was succeeded by a feeling almost of certainty, that it was he, when they received a letter from Robert`s brother from Winnipeg, a fortnight ago, so that they were fully prepared for the confirmation of the sad news, which this last letter conveys and which reads as follows:

To R. Middleton and wife

No doubt you saw through the papers some account of the troubles in the Northwest, where some of the brave volunteers of our town and Mounted Police were cut down by the savage enemy. Now, you must prepare for some news, that is painful for me to relate, as the one I am going to tell you about was a great favourite of mine and all the young men of the place. Among the number that was killed on the 26th of March defending his life, Queen and country, was your dear son, Robert Middleton. I regret very much to convey such sad news to you. But as one of the friends, that dressed him for burial and saw his remains to their last resting place, I think it my duty to write you.

All the dead were buried on the 27th March. It was a sad day in Prince Albert – nine young men buried side by side in one grave. The funeral was a large one and they were buried with military honours.

I will not trouble you with any of Robert`s business just now. I may state that his life was insured in the Confederate Life. The head office is in Toronto. I have the policy. It is for $1,000 and it will be sent to you. His other business will be looked after as soon as possible and his many friends will see that everything is all right. You had better appoint someone to do it or appoint two or three would be better.

Poor Rob is missed here very much. Everyone has a kind word for him. Write and let me know if you get my letter. I trust God will save the rest of us here from the Indians. Kind regards to you all, for Bobs sake, as I do not know you.

P. S. Rev. Mr. McWilliam will send you a paper I found in poor Rob`s pocket, that will console you. G. C. MacL.

Robert`s brother, Francis “Frank” Middleton also served in the Rebellion, as a scout for Major Boulton, in No. 3 Company of the 92nd Winnipeg Light Infantry. He arrived in Guelph in November 1885, carrying the bullet that had killed his brother and Robert`s gold watch.

Following this, Frank was employed as an engineer on the Canadian Pacific Railway in April 1886. He became a travelling salesman and worked for a California wine company in February 1888. In August 1888, he was a salesman for a liquor firm in New York. Possibly engaged with that same company, he was in Panama in March 1889.

The 12 acre Duck Lake battlefield was designated a National Historic Site on June 4, 1924. A cairn and plaque were erected there in 1950.