John Idington’s grandparents, John Idington and Margaret Johnstone, natives of Berwickshire, Scotland, emigrated to Puslinch with their grown family in the fall of 1833. They settled on lot 36, rear of concession 8, in the Badenoch section of the township, where the family remained until 1853. Their third child was Peter Idington, who was born in Westruther, Berwickshire in 1806.

Peter Idington married Catherine Stewart of Flamborough in 1839 and on October 14, 1840, a son, John, was born in Puslinch. In 1853, the family moved to Waterloo County, near Fisher’s Mills and remained there until 1879.

A brilliant scholar, John Idington attended primary school in Puslinch and secondary school at Galt Collegiate, under the renowned Dr. Tassie’s tutelage. He studied at the University of Toronto, graduating with an LLB in 1864. After being called to the bar, he joined Robert MacFarlane, M.P. in his practice in Stratford, Ontario, commencing a long, distinguished career. Robert MacFarlane died in 1872, leaving John Idington with a large practice. 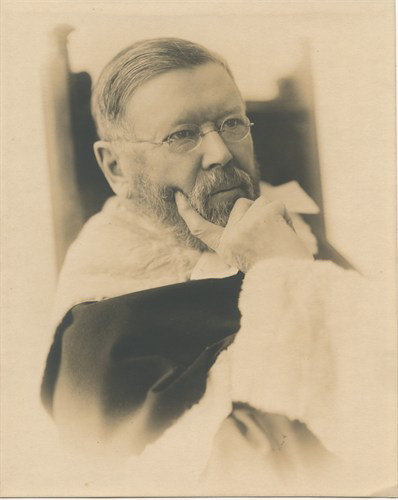 
He was appointed a Judge in the Ontario Supreme Court in March 1904. Only eleven months later, on February 10, 1905, he was appointed to the Supreme Court of Canada, where he served for 22 years. He came to be recognized as an outstanding legal authority and adjudicated on nearly all of the most important cases in the country. His work was marked by industry and individuality. He took stands for the rights of women and racial minorities and opposed conscription to the armed forces in 1918, during World War I.

Aside from his illustrious legal career, when Stratford was incorporated as a city in March 1885, John Idington was chosen to deliver the keynote speech at the banquet held on July 22nd. He served as a director of the Western Ontario Trusts Company and a member of the Stratford Hospital Trust Company. An active member in the Reform Party, he was also President of the North Perth Reform Association.

Justice Idington retired on March 31, 1927, after Parliament passed a law to legislate the mandatory retirement and pensioning of judges of the Supreme Court at 75 years of age. He died Feb. 7, 1928 at age 87 and was buried in Avondale Cemetery in Stratford.

For more detailed information on the career of Justice John Idington, see the writing of Gordon Bale on the website, “Dictionary of Canadian Biography”.