After years of lobbying, the Ministry of Transportation has finally approved the Highway 6 Morriston bypass.

“This is great news for our Riding,” Wellington-Halton Hills MPP Ted Arnott said. “The Morriston bypass will improve safety for our residents in Puslinch Township, and it will have economic benefits for a large portion of the province.”

Mr. Arnott expressed thanks to the Government of Ontario.

“I wish to thank the Ministers, as well as MPPs on both sides of the House who offered their support,” Mr. Arnott added.

The Highway 6 corridor is an important economic corridor which links Wellington County and the 401 to the Hamilton/Niagara Region, as well as to the U.S. border. There is currently a bottleneck through the community of Morriston, with traffic jams that often extend for several kilometres.

The project will realign Highway 6 south of the 401 to bypass the congested two lane section through Morriston and provide an improved connection to the 401 and the Hanlon Expressway in Guelph.

Mr. Arnott has been pushing for the project for many years, working with Township of Puslinch officials and other area partners.

“When my riding boundaries changed in 2007, I was once again privileged to represent the Township of Puslinch. The Highway 6 Morriston bypass project was identified as a priority and together we got to work,” Mr. Arnott said.

Mr. Arnott praised Township of Puslinch Mayor Dennis Lever, Council, and staff for the work they have done in helping to secure a promise from the Government to build the bypass.

“In May 2012, Mayor Lever, several Councillors, and I met with the Minister of Transportation to discuss the need for the bypass and how we could best move forward,” said Mr. Arnott. “The Minister challenged us to build a coalition of businesses and to develop a strong economic case for the bypass. Mayor Lever and Council worked hard to do just that, and they deserve a lot of credit.”

Mr. Arnott also acknowledged the role of past Councils and local residents.

“Past Councils, including former Mayor Brad Whitcombe, the County of Wellington Council and staff, the members of the Morriston Bypass Coalition, the Puslinch COP Committee, and many local residents were also instrumental,” Mr. Arnott added. “Working together, we were able to make progress.”

Mr. Arnott has raised the need for the Morriston bypass in the Ontario Legislature countless times. He repeatedly wrote and spoke to successive Ministers of Transportation to press the case. He also helped initiate meetings with Ministers. He tabled two Private Members Resolutions in the Legislature calling on the Minister to put the Highway 6 Morriston bypass on the Ministry of Transportation’s 5 year plan for highway construction.

According to the 2016/17 Ontario Budget, the Ministry of Transportation plans to spend $2.15 billion on highway infrastructure and an additional $768 million on “other transportation, property, and planning” this year.

The Ministry of Transportation estimates that construction could start as early as 2019. 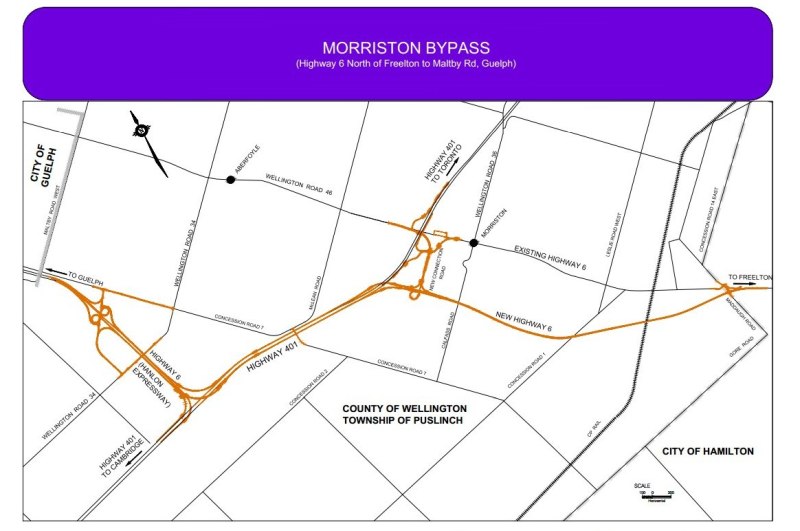