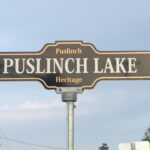 A notice appeared in the Hespeler Herald announcing an organizational meeting to be held on Friday, August 19, 1927 at the Lakeview Inn on Puslinch Lake to discuss the formation of the Puslinch Lake Boat Club. All parties interested in such a club were invited to attend. Fraser Klager, who was appointed chairman, explained that the purpose was to bring together those interested in boating and to take the first steps towards the formation of a club. He suggested that the club should have as it primary aim, the promotion of canoeing and rowing but that there would probably be other sports and dances in winter.

It was decided to elect the officers and an advisory committee, which would exercise control of the activities of the organization. The executive was: Robert Barrie of Galt – Honorary President; G. Alex Forbes of Hespeler – President; S. M. Goudy of Guelph – Vice-President; A. B. Jardine – Secretary; S. T. Organ – Treasurer; Fraser Klager – Captain and Coach. Members of the Advisory Committee were: J. S. Hewitt, R. McArthur, W. Hogarth, B. Flynn, C. Powell, D. W. Panabaker, Gordon Hortop, Alex Parks, John Jardine, Dr. H. Renwick, Allan Kerr, Dr. H. F. McKendrick, Dr. C. K. Henderson, A. Aitchison, Mr. Conduit and F. Pattinson. Convenors for three working committees were also appointed, with the power to pick their assistants. These were: R. M. Elliot, convenor of the canoeing committee, whose duty was the care of the boats and canoes and equipment; R. W. Phin, convenor of the sports committee, whose duty was to make arrangements for events; and H. V. Marshall, convenor of the membership committee. It was agreed to charge a nominal fee of $2. for the balance of the season. The executive and advisory committee was representative not only of Puslinch Township but also of the surrounding centres of Guelph, Hespeler and Galt, evidencing the wide appeal of the Puslinch Lake resort.

At a meeting held on Tuesday evening, Aug. 29th , at the summer cottage of Alex Forbes, the group decided on a name change from the Puslinch Lake Boat Club to the Puslinch Canoe and Boat Club. This was primarily to correct a misconception that the club was to be mainly devoted to rowing, while the aim was to eventually include all forms of water activity, including swimming. As well, there were rumours that factions in Guelph wanted to change the name of the lake itself. Naturally, feelings of resentment immediately arose in Puslinch Township but the name was adjusted to omit the word “lake”, in case of this eventuality.

On Sept. 21 st , the group decided to rent the Barry cottage and the island until December 1928. Tentative plans were made for a dance to be held shortly, with arrangements left to Gordon Klager, H. V. Marshall and Robert Elliot. As well, crests were ordered, the membership was reported as 16 and an issue still being dealt with in 2009, the matter of clearing weeds from the lake, was discussed.

In June 1928, the club met to plan its first regatta at Swastika Beach on Puslinch Lake on July 2nd. An ambitious twenty-two events were arranged for, including canoe and boat races, tilting and relay swimming. Prizes were donated and “ladies events were also included”.

Here is an article from July 5, 1928, entitled “Successful Regatta”:


“The Puslinch Canoe and Boat Club had ideal weather for their first programme of water sports, which was staged at Swastika Beach on Monday.

From the spectators’ point of view, the tilting match was the most interesting event. Seven pairs were involved in this and it worked down until two pair, M. Wehner and Jim Kerr and Fraser and Gordon Klager were left. So even were they, that the winner was decided by the toss of a coin and the first team won.

There were five entries in the four-man canoe race and only one of the 16-foot canoes crossed the line.

Prizes were awarded to the lady and gentleman who had the high aggregate point score during the day. Miss I. Deacon received an ironing board presented by the W. A Kribs Co. and Ed. Smith of Preston was given an order of meat, donated by R. W. McCreary.

Those who assisted in the capacity of judges were W. J. Marriott, J. E. Hunter, J. G. Hortop and J. F. Kohli of Hespeler, S. Goudy of Guelph, vice-president of the club and President G. Alex Forbes of Hespeler.”


In May 1929, Ross Barber began the building of a boathouse to house the equipment and to provide a club room for the group. At a meeting held in June, women had succeeded in raising their profile to such an extent, that a motion was made to form a ladies branch of the club. This, however, was “left over for further discussion” and the newspaper termed it a “ladies auxiliary”.

The 2nd annual regatta was held on Monday, July 1, 1929. A portage race was included. R. Ranscombe of Preston was the winner. Starters were V. F. Hunt and Matt Seigle. Judges were R. M. Phin and W. Conduit. Alex Parkes was announcer. Neil Baird acted as secretary. Jack Baker and Morris Huether assisted with handling the races and policing the course.


“The four final prizes for the July 1st regatta have been announced as follows: The $5. prize, donated by S. T. Organ, for the club membership with the highest number of points in the day’s programme was awarded to Gordon Klager. Jack Morris won the pair of canoe paddles donated by George Murray for the second highest man of the day. Miss Myrtle Parr won the clock donated by F. W. Gunther, for the highest lady in the day’s sport and Miss Helen Connell was awarded the 20 pounds of sugar, donated by J. F. Kohli, as the second highest lady for the day.”


The July 11th article announced that a swim meet was to be held on the Civic Holiday, to which several cups, as well as medals, had been donated. The races were open to amateurs from Wellington and Waterloo Counties.

At the annual meeting in January 1930, it was reported that four regattas for club members had been held in 1929, as well as several open regattas on holidays. Equipment on hand was valued at $405. By 1931, the Depression was having an effect and at a meeting on April 1 st , it was decided that “the membership fee would be reduced, owing to the present economic conditions”. Probably for this reason, a Globe and Mail article on Sat., May 27, 1933, states that, “after several seasons of inactivity, the Puslinch Canoe and Boat Club was reorganized here today, about 40 members being present at the meeting, which was of an enthusiastic nature”. Despite the enthusiasm, intentions to build a clubhouse were planned “ on a small scale at first, with the idea of enlarging at some future time. The work of building will be done by the members.”

Sadly, this active organization probably was a victim of the long economic hardship known as “The Depression”, as this is the last report I located on its energetic undertakings.