William Leslie, Postmaster of Puslinch Village Post Office wrote, for a history of Wellington County, that in 1848, there was a large emigration of people from Highland Scotland, many of whom settled in Puslinch. He stated that a great many of them died on the road and that some of them were buried on the property owned by John Marshall. This was lot 34, rear of concession 7 and lot 35, concession 7. Annals of Puslinch 1850-1950 states that, in the Killean section, about 40 settlers arrived from Uist in 1849. The book goes on to say that nearly double that number embarked but that cholera took a toll on the voyage. These people were destitute and ill when they arrived in Crieff and Killean. 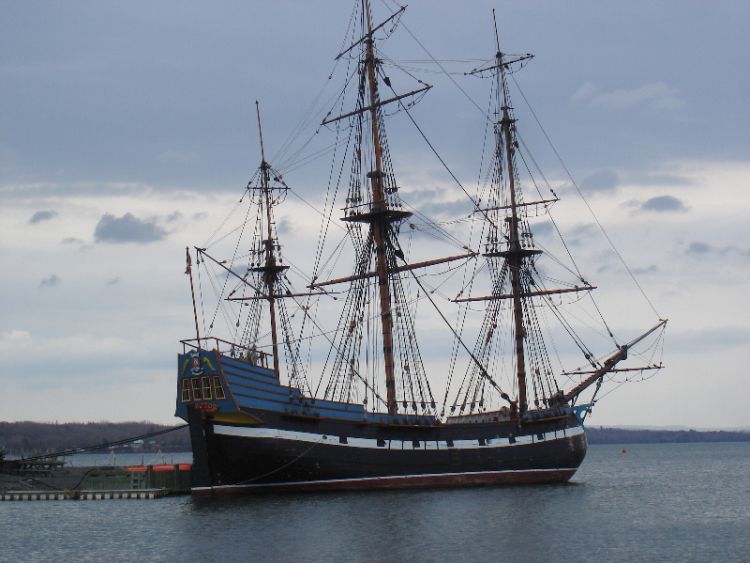 The Hector carried almost 200 poor Scottish settlers to Nova Scotia in 1773. The year before, over 200 people from South Uist sailed for Prince Edward Island to escape religious persecution at the hands of the chief of Clan Macdonald of Clanranald. Source: Wikipedia


The Highland Scottish islands of North and South Uist, under the clan system, were the property of the McDonalds of Clanranald. According to Uist historian, Bill Lawson, the first emigrants left Uist for Carolina not long after 1745. A large emigration took place in the 1770’s, with people from North Uist emigrating to Cape Breton and people from South Uist to Cape Breton and Prince Edward Island. These emigrants he termed the “pioneers, who were better equipped than later emigrants for the rigours of starting a new life”.

The conversion to sheep farming began in the 1820’s. Bill Lawson states that, at the same time, the tenants of South Uist were persecuted for proclaiming their faith as Roman Catholic, evicted and replaced by Protestant tenants from other islands. The Highland chiefs began to find themselves in financial difficulty, largely due to living beyond their means in London, Paris and Edinburgh. McDonald of Clanranald went bankrupt and was forced to sell his lands to Colonel John Gordon of Cluny in 1838. Colonel Gordon described the tenants as “redundant” and the clearances began.

The kelp industry upon which many of these families depended, particularly after losing their rented land, collapsed in 1844, adding to the privation. As well, the potato blight of the 1840’s caused a failure of the crop, which had sustained the impoverished people. After this, the people lived on shellfish and seaweed.

The new landowner, Colonel Gordon threw the Scottish tenants of Clanranald off their traditional land, with the assistance of the constabulary, armed with guns and snarling dogs. They were replaced with farmers from Lowland Scotland. John Gordon cleared hundreds of families from his land during 1848-1850, hauled them to boats and shipped them to Canada. According to Bill Lawson, by far the greatest number of the South Uist people settled in Ontario, many in Williams Twp. Middlesex Co. and Glenelg Twp., Grey Co.

These emigrants, Bill Lawson called “refugees, for many left with nothing but the clothing they wore”. Dilapidated old hulks, used to carry timber from the New World to Britain, put the return journey to financial benefit by carrying emigrants to Canada. John MacLeod writes in his book, Highlanders, A History of the Gaels, “between 1847 and 1853, at least forty-nine emigrant ships sailed from port, laden with these miserable people and were never heard of again”. Many, who survived the journey, perished on the shores of the St. Lawrence. These starving Uist settlers were racked by cholera on the voyage or were forced to beg upon arrival. The Quebec Times reported in the summer of 1851, “Up to last week, some 1100 souls from his (Colonel Gordon) estates had landed at Quebec and begged their way to Upper Canada”. In this condition, they walked twenty miles up the Brock Road from Dundas to Puslinch.

The names of six families are given in Annals of Puslinch, 1850-1950: McLennan, McDonald, McPhee, McVicar, McGeachy, McLeod. However, when the 1851 census is examined, although there are other families by those names, which have been resident in the township for some time, none of these people can be found.

Most, however, are listed on the 1861 census. All were born in Scotland. These families were all living in shanties, squatters on farms, lot 16, rear of the Gore and lot 16, front of the 1st concession, at sideroad 20. Almost all of the men had no particular skill and were listed as labourers. All of these families were Roman Catholic, in contrast to the other Highland Scottish families of the township, which were almost exclusively Protestant. Those listed on the 1861 census do appear to be incomplete families, such that it is difficult to determine the relationships between members. Adults of the families were employed by the farmers of Crieff and Killean as hired men, domestic help or seasonal workers, until the younger members or their children could improve their lot. Who were these Uist people?

As there were no other Scottish Catholic families in the township, the young adults of the Uist settlers married within the group. Ann McLeod’s son, Hugh married Mary McPhee, daughter of Archibald McPhee. They had three daughters: Catherine (Aug. 8, 1863-Jan. 25, 1911, married Michael McLellan) was born in Puslinch, Sarah, born c.1865 and Anna, born c.1870. Hugh and Mary McLeod later lived on Henry St. in Galt. When the census was taken in 1891, Laughlin McDonald was living with Hugh and Mary. Hugh died in Galt on March 2, 1908.

In the case of the MeLennans, Bill Lawson discovered it was actually the McLellan family from Loch Carnan in South Uist, frequently rendered on records in Puslinch as McLelland. Archibald McLellan, born c.1802, is the only man with an identified skill; he was a tailor. His wife, Sarah McLellan was born c.1807 and his children, Malcolm McLellan, c.1837, Angus McLellan, c.1839, John McLellan, c.1846 and Donald McLellan c.1850.

Mr. Lawson also located the Angus McIntosh family from North Lochboisdale in Puslinch on the 1861 census. They seemed to be faring somewhat better than the other Uist settlers, as they were living in a log house. They were Angus McIntosh, born c.1804, his wife Sarah McEachern, born c.1817 and their children, Mary, c.1841, John, c.1842, Flora, c.1847, John, c.1849. Christina “Christy” was born here in 1857. By 1871, Angus and Sarah and the two youngest children had relocated to Williams Twp., Middlesex Co., where there was a larger number of Uist settlers.

In 1871, the McDonald family was still living in Puslinch. However, John was married to Christina ?, born in 1841. As well, the McGeachy family had arrived in that very year and was living with the McDonalds in their shanty. The McGeachy family consisted of Flora McGeachy, a widow, born c.1837 and her sons, who were all born in Ontario, John, born c.1856, Archibald, c.1861, Donald, c.1863), Dugald, c.1865 and Joseph, c.1868). Unlike the Presbyterian family of John and Catherine (McMillan) McGeachy, who arrived in Puslinch in 1859 from Campbeltown, Argyleshire, this family was Roman Catholic.

The saddest outcome of them all was that of Laughlin McDonald. He was known throughout the township and beyond as, in the summer months, he would work for the farmers and in the winter, he would go into Guelph, Hespeler or Galt. In April 1917, when Harold B. Tolton went into an old house on his property, which he used for machinery storage, he found a body. There was mud on the boots, indicating that the man had entered either before or after freeze-up. It was probably the previous fall, as some degree of decomposition had occurred. Constable Harmer of Aberfoyle was called to the scene. He was able to identify the man as “Lockie” McDonald by his clothing and by the fact that part of his left foot was missing. It was known, too, that a couple of years previously Lockie had narrowly escaped freezing to death in a barn in Pinebush, being found just in time. His body was buried in Crown Cemetery.

No McVicar family or family member has yet been identified, that appears likely to have arrived in Puslinch around the same era. In total, 27 of the possibly 40 people, who emigrated in those tragic conditions from the isles of Uist, have been determined.


By Marjorie Clark
Previously published in two parts in The Puslinch Pioneer, 2013.
Republished here with permission of and by request of the author.