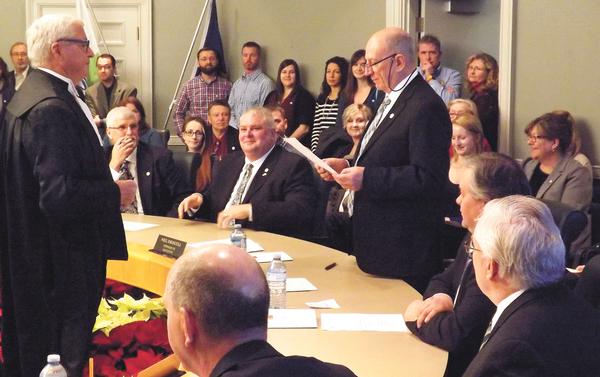 Oath of office – Justice Casimir Herold, left, administered the oath of office to Warden Dennis Lever (standing) at the inaugural meeting of Wellington County council in Guelph on Dec. 9. Photo by Patrick Raftis

He was the only councillor to announce he was seeking the office for the 2017-18 term.

Lever was elected mayor of Puslinch in 2010 and again in 2014. He is past chair of the county’s administration, finance and human resources committee and has also served on the information, heritage and seniors committee.

“Warden Lever has an impressive political résume,” said outgoing warden George Bridge, mayor of Minto. “I look forward to working under Warden Lever’s direction. His effective leadership as administration, finance and human resources chair has prepared him for his new role as warden. The county will continue to be in very capable hands.”