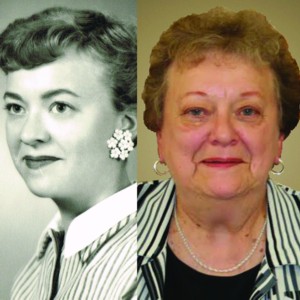 CARON, Darlene Emily (Carruthers) passed peacefully on Sunday, January 8, 2017, with her loving family by her side. She will be sadly missed by her husband of 54 years, John M. Caron, of Guelph. She was an incredibly loving and inspiring mother to Laurie Caron Pasher (George) of Cape Breton, Leanne Caron Piper of Guelph, and David Caron (Jodi Armstrong) of Toronto. Loving grandmother to Justin, Jaime, and Kalvin Goyer (Natalie Loft), Shawna Smith, Bradley, Lyndsay, Bryan (Claudia Smith), and Douglas Piper, and Olivia and Spencer Caron. Great-grandmother to Lion Ciuffreda. Darlene was born April 3, 1939 in Drumheller, Alberta, daughter of Floyd and Peggy (Taylor) Carruthers. The eldest of four siblings, she will be mourned by sister Phyllis (Herman) Nygaard, and brothers Douglas (Penny) and Bill (Trish Bailie) Carruthers, and sister-in-law Myrna Carruthers. She was proud of her Prairie roots and her coal-mining and blacksmithing heritage. Darlene was the first of her family to seek post-secondary education, graduating as a Registered Nurse from Calgary General. She moved to Winnipeg to specialize in Operating Room nursing, where she met a dashing RCAF officer and they married soon after. John and Darlene settled near Arkell in the 1970s, and later to Guelph, where Darlene worked at St. Joseph’s and Guelph General Hospital. She was a kind and caring soul, and throughout her life was active in many community activities. One of her greatest pleasures was going to the Guelph Farmers Market on Saturday mornings.

In lieu of flowers, donations to the Guelph Community Foundation are welcome. Cards are available at the funeral home, 519-822-4731 and condolences can be left at www.gilbertmacintyreandson.com.