This is the sixth in a series of articles about the health of the people of Puslinch from the earliest days of settlement to approximately 1960. 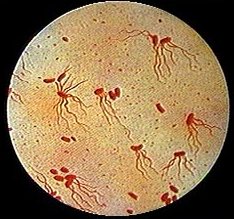 Typhoid Fever is caused by the bacteria, Salmonella Tyhi, being ingested in food or water. This occurs due to unsanitary conditions such as failure to wash one’s hands or too close proximity between water source and septic system. It surfaced in crowded living conditions in mostly urban areas in early days, due to lack of understanding of these matters. Particularly in the villages of Puslinch, backhouses, as outdoor privies were called, were sometimes too close to the dug wells. The incidence declined through 1900 to 1950, due to advances in sanitation and hygiene.

Also called gastric fever or remittent fever, the disease is characterized first by a high fever (104F/40C), abdominal pain, headache and lethargy and later by diarrhea. Untreated, symptoms last for three weeks to a month and 10% to 30% of the afflicted die, due to complications.

In 1880, the bacteria was identified and in 1884, Almroth Wright developed a vaccine at the Army Medical School in Nettley, England. However, the vaccine does not provide long-lasting protection.

The Ontario Government passed the Public Health Act in 1882, creating the Provincial Board of Health of Ontario. A Puslinch Township Board of Health was established in 1884 and a health inspector was appointed in the township. According to Annals of Puslinch, 1850-1950, the Board met four times a year to make and receive reports on the medical and sanitary conditions in the township. The Board still existed in 1950.

Andrew Munro held the position of Health Inspector for longer than twenty-eight years after the creation of the position. He looked over the village of Morriston during a week in mid-May 1890 and concluded that it was in a better sanitary condition than in former years. In particular, he examined the wells and found them to be satisfactory.

On May 5, 1891, the writer of “Morriston Jottings” warned: “Our Sanitary Inspector will soon be on the warpath through the township and village. Parties, who have yards and wells to clean, had better have it attended to at once.”

The “Morriston Jottings” columnist reported in December 1891, that typhoid fever was on the increase in Puslinch. He wrote on July 12, 1892, that the teacher at Morriston School, Miss McLelland, had been taken ill with typhoid fever on the eve of her vacation.

On Oct. 30, 1894, Mrs. James McLean and her son, Alex of Morriston, who both had typhoid fever, were on the mend. Miss Winer, who had the same disease, was also better. On November 20, 1894, Miss Minerva Bond, the schoolteacher in Morriston, who had been “at home for some time, suffering from a slight attack of typhoid fever”, had just resumed her duties.

There were three cases of the disease within Morriston in August 1895 and one just outside the village. The “Morriston Jottings” columnist reported on Oct. 1st, that there were still quite a number of cases in the village and warned that, although it may not be known, a fine ranging from $15. to $20. could be imposed for having fever in the home, while not reporting it to the Board of Health. In October, Samuel Jacobs and Miss Jacobs of Morriston had recovered and Mrs. Peter McKenzie was recovering.

John C. Smith of the Arkell district was taken, in critical condition, to St. Joseph’s Hospital with inflammation of the lungs and typhoid fever in February 1896. At the same time, P. A. Hume of Arkell was in the General Hospital with the same disease, Mrs. A. Hume was also afflicted with it and Charles Duffield was recovering from it. Willie A. Hume, 16 years old, died from it on March 1st, after being ill for a month. On July 21, 1896, Miss Susannah Martin of Morriston, who had been very ill with typhoid fever, was on the mend.

Miss Etta Bond, the schoolteacher in the Junior Room of Morriston Public School, was taken ill with this disease in September 1897. Her sister, Miss Minerva Bond took charge of her class during her recovery. Peter McLean of Viewfield in Badenoch was ill with it in November 1897. In January 1898, Henry Arkell was stricken with typhoid and taken to the General Hospital in Guelph, where he remained for about eight weeks.

Typhoid Fever was still around after the turn of the century. On Oct. 8, 1903, Fred Miller, who worked for and resided with the William Winer family, south of Morriston, was taken to the hospital, suffering from typhoid. Mrs. Blake of the Aberfoyle area was ill with typhoid in October 1910.

On September 21, 1911, the Aberfoyle columnist reported some alarm present at the continued prevalence of typhoid fever in the village. Mrs. Foster, who had been very ill for some time, was recovering but Miss S. Foster had recently developed the disease and had, that day, been admitted to St. Joseph’s Hospital. On September 26, 1911, Miss Chrissie Hammersley was also afflicted. All were progressing favourably by October 10th.

Leslie Eagle, who had been convalescing at home at Puslinch Lake, returned to his work in the office of a lithographic company in Hamilton on March 31, 1913. Miss Patty Smith of Aberfoyle suffered from typhoid fever in August 1913.

On November 2, 1915, Joe McConnell of the Crieff district was reported to be improving. A boy in Aberfoyle, Frank O’Connor, developed typhoid in September 1918 and George Hewer was ill with this disease for four weeks in November 1923.

The following were some of the victims of typhoid fever: