This is the eighth in a series of articles about the health of the people of Puslinch from the earliest days of settlement to approximately 1960.

According to a newspaper clipping, reprinted in Ellis Church, Enduring and Everlasting, diphtheria was reported to be prevalent in the Puslinch Lake area in the fall of 1887. R. C. Morison of Morriston was recovering from it in July 1896. In January 1897, Mary Doyle was sick with diphtheria. When her friends persisted in attempting to visit her, a special constable, George D. Stratton, was sworn in to enforce the quarantine of her home in Morriston.

Diphtheria was common and afflicted mostly children. It could become fatal very rapidly, as many of those listed below died after only one to three days. It was the leading killer of children in the 1880’s. Emil von Behrig successfully treated a sick child with diphtheria antitoxin on Christmas Day, 1891.

Still, Maggie McNaughton of Crieff was confined to bed and quarantined on Feb. 26, 1906 and on March 6, 1906, Earl Carter of Arkell had recently recovered from the disease and the quarantine had been lifted. The Strachan’s Corners columnist reported on Nov. 16, 1910, that those afflicted with diphtheria were recovering and that the quarantine would soon be lifted. On Nov. 22nd, she noted that there were no new cases in the section “and we hope the scare is over”. In 1942, Dr. James King, assisted by nurse, Jessie Nichol of Puslinch, was immunizing Puslinch students at schools.

Here is a list of some of those who died from diphtheria:


Scarlet fever was responsible for the deaths of many children throughout the years. Among those who perished from it in Puslinch were:


The Board of Health received notice of three cases of scarlet fever on the 10th concession on Nov. 21, 1898. The Morriston columnist reported on Oct. 31, 1901, that the school had been closed for ten days and the closure was likely to continue for another ten days, due to an outbreak of scarlet fever. On May 8, 1906, the Strachan’s Corners correspondent noted that Downey’s School had reopened the previous Monday, after being closed for a week, due to “a mild form of scarlet fever”. At this time, all were convalescing satisfactorily and there were no new cases.

On Sept. 7, 1910, the Arkell columnist wrote:
“We are having a visit of scarlet fever here; three families are placarded but all the cases are of a mild type.”

Arkell School was closed. The Aberfoyle School reopened on Dec. 13, 1910, after being closed for two weeks due to an outbreak.

The Third Concession School (S. S. #5) re-opened on May 27, 1912. It had been closed for a week for cleaning and fumigating, after a child had died from scarlet fever. The columnist from Strachan’s Corners noted that scarlet fever was again a menace on Dec. 29, 1912 but it was hoped it would not be a serious outbreak. She wrote, on Jan. 3, 1913, that the cases were reported to be mild. David Maltby’s home was under quarantine in early January 1913. On January 30, 1922, the Aberfoyle correspondent noted that scarlet fever was reported at Arkell and that S.S. #1, Arkell School, was closed.

This childhood disease was still a scourge as late as March 1937, when a girl from Crieff was hospitalized in the Guelph General. The Morriston correspondent to the Guelph Mercury wrote on March 20, 1939, that Morriston School had reopened the previous Monday, after being fumigated due to a few cases of “a mild type of scarlet fever. Mrs. Thomson of Guelph is relieving the junior teacher, Miss Jean A. Macpherson, who is in the Guelph General Hospital with scarlet fever”.

Again, on Dec. 12, 1941, Puslinch Lake School closed, as a case of scarlet fever appeared in that section. The Aberfoyle correspondent reported that Billie Ord was under quarantine for scarlet fever on April 1, 1942.

Consideration was given to closing Morriston School in September 1896 due to whooping cough, as half the pupils in Miss Bond’s room were absent. The Strachan’s Corners correspondent mentioned on May 11, 1897, that whooping cough had broken out in the neighbourhood. By June 9, she reported that it was only a few cases. The Arkell correspondent stated that mumps were prevalent in the area on May 24, 1898.

The Morriston correspondent wrote on May 22, 1906:
“A number of children in this section have whooping cough. It is said to be of a mild form.”

A vaccine was developed and widely used in the 1950’s for whooping cough, officially labelled pertussis, almost putting an end to this disease.

As well, the communicable diseases, measles, mumps and chicken-pox were so common, that it was assumed that most children would be stricken with them, even into the 1960’s.

On April 22, 1907, the Crieff columnist wrote that:
“The measles still seem to be holding their own. Many are still quite sick. The attendance at school has been materially lessened on this account.”

The majority of the students at Aberfoyle School, as well as a few adults in the area, took the mumps in April 1910. The correspondent from Strachan’s Corners reported chickenpox of a mild type was prevalent in the section on Jan. 21, 1913.

The Arkell correspondent wrote on Jan. 29, 1917:
“There has been a general epidemic of sickness in our neighbourhood lately. Most of the children are laid up with measles and the school is closed.”

On March 27, 1917, the correspondent from Morriston noted that mumps had made its debut in the vicinity.

On October 23, 1930, the first case of infantile paralysis, later known as polio, was reported in Puslinch Township. A girl of 14, residing near Puslinch Station, had developed a mild case. The next victim was a baby at Barber’s Beach in August 1949. This horrible disease instilled fear in the community until Dr. Jonas Salk developed a vaccine in 1952.

Through the years of the 20th century, the health of the citizenry gradually improved. Miss McColl, school-teacher in Morriston wrote in her section of the Morriston column on July 1, 1943:
“There were no epidemics in the school this year. The most serious complaint was a general case of the fidgets during the last days of June.”

Just prior to Easter, in the April 8, 1944 column, however, she remarked there were thirteen cases of chickenpox and one other possible case in the school. Again, on Feb. 11, 1950, the Morriston correspondent reported chickenpox among the children. Neither parents nor doctors were concerned about the common diseases of measles, mumps and chickenpox; they were considered to be a normal part of childhood. There were still no immunizations against them and there would not be for years. The long term effect is that aging baby boomers are at risk for shingles now, if they contracted chickenpox as youngsters, since the virus remains in the nerve and re-emerges in this different form. 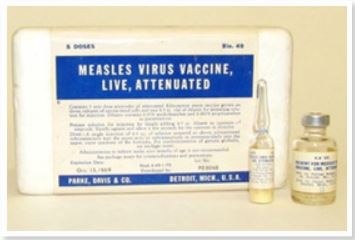