This is the ninth in a series of articles about the health of the people of Puslinch from the earliest days of settlement to approximately 1960.

Influenza or “La Grippe” as it was usually termed, was present, just as today. The Morriston correspondent wrote that an epidemic of La Grippe had taken a strong hold on the community on Dec. 19, 1893, new cases being reported every day but that it was of a much milder variety than the previous outbreak.

The Puslinch Lake correspondent wrote on March 15, 1897:
“Mrs. Thomas Fyfe is recovering from an attack of la grippe. Several are suffering from that common enemy, amongst the rest being the family of Mr. Lisso, every member of his family being ill at the same time.”

On March 15, 1915, the Strachan’s Corners correspondent wrote:
“An epidemic of influenza, accompanied by severe sore throat, has been in many homes lately.”

Towards the end of World War I, the Spanish Flu returned with the soldiers from the trenches. On Nov. 5, 1918, the Morriston columnist noted that the epidemic was lessening in the village. Those that had the dreaded disease were better and working again and there were no new cases. Dr. King had worked untiringly. There were no new cases in Aberfoyle, either. Schools and churches remained closed. It was still circulating in the remainder of the township as, at the Feb. 6, 1920 meeting, the Board of Health decided to prohibit all social gatherings and unnecessary meetings within the township, until the influenza epidemic abated. The Morriston columnist in the Guelph Mercury, noted on March 9, 1920, that the school had opened on the previous Monday, after being closed for a month due to the influenza. 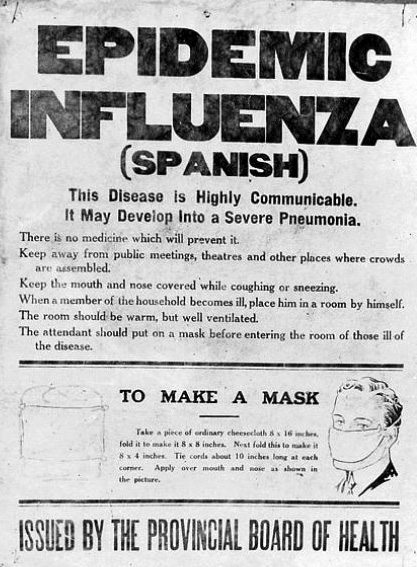