This is the eleventh in a series of articles about the health of the people of Puslinch from the earliest days of settlement to approximately 1960.


The Ontario Government passed the Public Health Act in 1882, creating the Provincial Board of Health of Ontario. A Puslinch Township Board of Health was established in 1884 and a health inspector was appointed in the township. According to Annals of Puslinch, 1850-1950, the Board met four times a year to make and receive reports on the medical and sanitary conditions in the township. The Board still existed in 1950.

Andrew Munro held the position of Health Inspector for longer than twenty-eight years after the creation of the position. He looked over the village of Morriston during a week in mid-May 1890 and concluded that it was in a better sanitary condition than in former years. In particular, he examined the wells and found them to be satisfactory.


“Our Sanitary Inspector will soon be on the warpath through the township and village. Parties, who have yards and wells to clean, had better have it attended to at once.”


“The attention of the Puslinch Health Inspector is called to a horse, which has been buried (but not deep enough) between the 4th and 5th concessions. The stench is abominable, so those who drive along the road say.”

Here is a report about a meeting of the Puslinch Board of Health held in the Council Chambers of the Aberfoyle Hall on Monday, Nov. 26, 1906 at 2 p.m.:

“The chairman, Mr. Iles, being absent, Mr. Marshall was appointed chairman pro tem. The minutes of the last meeting were read and approved.

The report of the Sanitary Inspector was received and adopted. It stated that he had kept a thorough oversight of the sanitary condition of the township during the year and had disinfected the several houses, whose occupants had been suffering from any contagious or infectious disease and that the health of the township was now in a very satisfactory condition and free from any form of malignant disease.

The Board adjourned to meet at the call of the Secretary. George Meldrum, Secretary.”

The Board of Health met in the Council Chambers at Aberfoyle in November 1910, with a report that the township had not been visited by any severe epidemic that year, although some isolated cases of diphtheria, scarlet fever and measles had occurred. There were 25 deaths in the township that year.

John Martin was appointed to the position of Sanitary Inspector in 1913, as Andrew Munro had died in 1912.

In a column dated April 26, 1915, the Morriston correspondent reminded: “In less than a month, the sanitary inspector will expect all manure pits removed from the village. The majority of those, who keep horses, have no doubt a copy of the section dealing with the matter, therefore no excuse will avail or be accepted”.

Until this time, most farmers simply buried or dumped garbage in a swale or other uncultivated area of their farms. The inhabitants of Morriston dumped their refuse in Morriston Pond until another small pond on the Stahl/Currie farm on the Badenoch road was substituted.

In November 1949, the Wellington County Health Unit advised Puslinch Township Council “that, as a measure to control the indiscriminate dumping of rubbish and refuse in unapproved locations, which is prevalent throughout the County, the Health Unit is posting “No Dumping” placards at such places and stating that citizens contact the Township Clerk for the location of an approved area”. The Health Unit suggested that a number of satisfactory locations be established in the Township and be publicized as such.

There was one already in existence in what was originally a small pond on the Currie farm on Badenoch Street, on the outskirts of Morriston, which continued to be used by a large portion of the township populace until June 1963. At that time, the Township purchased the current official site on concession 4. 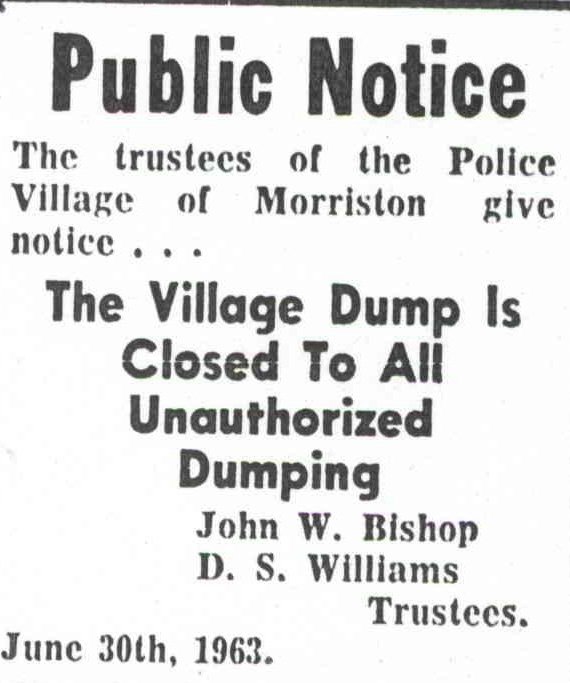 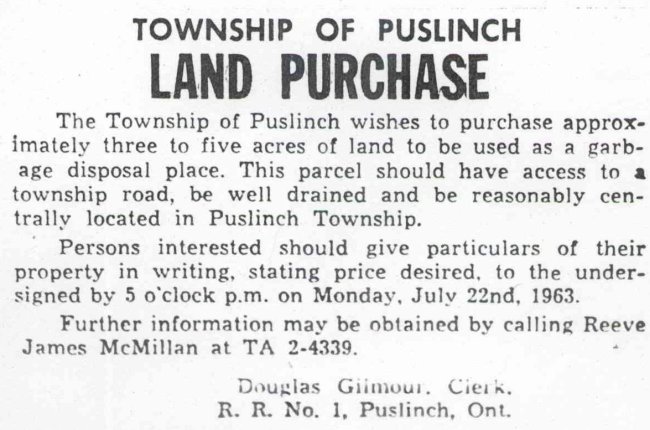 The cottagers of Puslinch Lake, most of whom were accustomed to urban amenities, petitioned for garbage collection, which commenced in that area in July 1951. Wilfrid Hewer received a remuneration of 10 cents per cottage for collection. Where the refuse was deposited was not addressed in the Puslinch Township minutes.

Cecil Weekes of Aberfoyle urged Council, at a meeting on Dec. 29, 1951, to establish a site near Aberfoyle. There was considerable talk at the July 5, 1952 Council meeting about a number of cattle belonging to Crastor Scott and Ralph Sherwood of the Arkell district, diagnosed by veterinarians as poisoned by lead. The lead was thought to have leached from old paint cans dumped into a swamp in the pasture. Again, Council discussed the necessity to provide suitable, designated areas and each councillor was to endeavour to locate such in their section and report at the following meeting.

In January 1953, Puslinch Township Council made an agreement with William Pilkington of lot 5, front concession 2 for garbage to be deposited on his land for the sum of $100.00 per annum. Mr. Pilkington complained to Council in March 1957, that the manner in which garbage was being dumped made it difficult for him to pack it down and to keep it free of rats. Council responded by raising the remuneration paid to Mr. Pilkington to $130.00 per year, “Mr. Pilkington to be responsible for packing and covering garbage and purchasing Warfarin for controlling rats”.