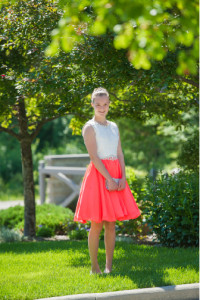 It all started when Puslinch residents Tim and Charlotte Blevins took their daughters to a pig roast for Thanksgiving in 2011. Little did they know that their nine-year-old daughter, Kayla, would soon be fighting for her life.

Several people who had attended the party started falling ill within days of that Thanksgiving meal, including Kayla’s older sister Alyssa. Luckily, Alyssa’s condition would soon improve.  Four days after the pig roast, Kayla would become so ill that her parents took her to the local hospital in Guelph. “She was looking extremely pale,” recalls Charlotte. “Every 20 minutes, she was throwing up or having extreme diarrhea. I can’t even describe how severe it was.”

As Kayla’s condition continued to deteriorate, she was transferred to McMaster Children’s Hospital and placed under the care of Dr. Steven Arora. Kayla was experiencing kidney failure due to a severe E. coli infection and was put on life-saving dialysis. She was also extremely dehydrated and required a number of blood transfusions because she had lost so much blood.

Kayla was determined to regain her health so she could be home for her upcoming birthday. A shunt was placed into her neck to deliver the dialysis during her two-and-a-half-week stay at McMaster Children’s Hospital before being discharged just in time to celebrate her tenth birthday at home.

“We are so thankful that Dr. Arora and the staff knew exactly what to do. They stabilized Kayla and they saved her life. The care she received was exceptional,” says Tim.

Although Kayla’s kidneys began functioning again, she still suffers from lasting effects from her ordeal, including food intolerances and low energy levels.

“E. coli strips your stomach, so both good and bad bacteria are gone,” says Charlotte. “Now she has really bad food intolerances that she never had before. We’ve been working to find the best diet for her.”

Grateful for the care Kayla received, Tim and Charlotte wanted to give back and they committed to raising $650,000 to redevelop the Nephrology Clinic at McMaster Children’s Hospital so more children can have access to this incredible program when they need it most.

“The Caring for Little Kidneys Campaign was established by Charlotte and I to provide the best environment and equipment for the many children that will need the same treatment as our daughter,” says Tim. “We know firsthand how difficult this experience can be. While Kayla only had to spend a few weeks on dialysis, many children are not as lucky. We know what a difference these new facilities will make.”

To learn more about the Caring for Little Kidneys Campaign, visit: www.hamiltonhealth.ca/caringforlittlekidneys

Click here to find out more about the 2nd annual Take a Ride for MacKids presented by Reid’s Heritage Homes to raise funds for the Caring for Little Kidneys Campaign.