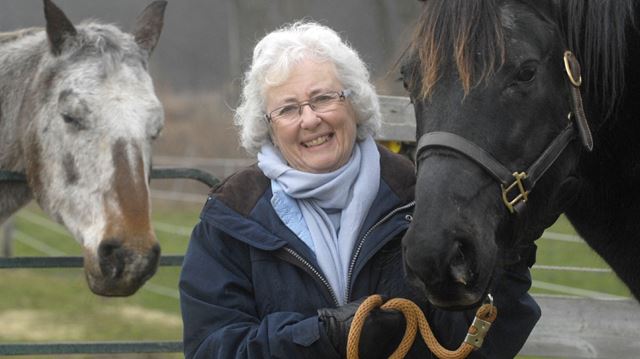 Ann Caine, founder of Sunrise Therapeutic Riding and Learning Centre, in Puslinch stands beside two riding horses, “Sam” on the left and “Trooper” on the right.

Ann had a deep understanding of the incredible positive impact that horses could have on children and adults emotionally, physically, cognitively and behaviourally, and wished to provide opportunities for horse-based therapy for those with special needs in the Guelph area. In 1982, her vision became a reality with the founding of Sunrise Therapeutic Riding & Learning Centre. Ann served on the Sunrise board, and as a volunteer fundraiser for many years, a role she continues today as Board President.

In 1996, the centre moved from rented facilities to its own property with an indoor arena, and full-time, year-round services began. From 1996 until her retirement in 2014, Ann served as the centre’s Executive Director, overseeing the implementation of many innovative new programs and services beyond the core therapeutic riding program, and diligently raising funds for each new and existing project. Ann was also founding member of the Canadian Therapeutic Riding Association (CanTRA) and served on the International Paralympic Equestrian Committee, helping introduce equestrian sports to the Paralympics in 1996.

Ann also serves the community through her work with the Rotary Club of Guelph South and the Salvation Army. She has been recognized for her tireless service and positive impact on her community through several other past awards: the Ontario Medal of Good Citizenship (2010), induction into the Canadian Foundation for the Physically Disabled Hall of Fame (2012), the Governor General’s Caring Canadian /Sovereign’s Medal for Volunteers (2016), and the City of Guelph Accessibility Award (2016).