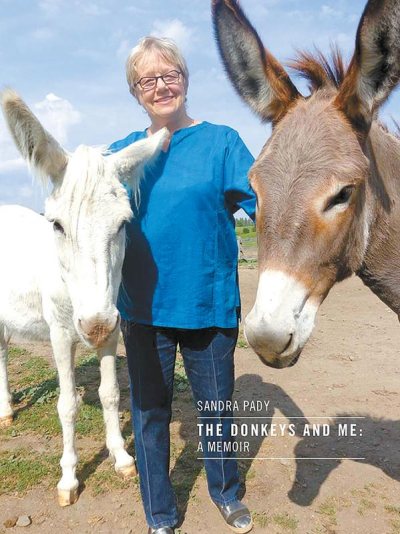 A memoir – Donkey Sanctuary of Canada founder Sandra Pady wrote her story in her new book The Donkeys and Me: A Memoir. Photo Submitted to Wellington Advertiser.

The founder of The Donkey Sanctuary of Canada has written a book to tell her story.

“Over the years I have been asked an unknowable number of times how I came to start a donkey sanctuary and also about the animals themselves,” said Sandra Pady in an interview with the Advertiser.

With the Donkey Sanctuary, located in Puslinch Township, celebrating its 25th anniversary in August, Pady said now was the time to tell her story.

She split The Donkeys and Me: A Memoir into two sections.

“The first part tells … how I came to be the person who would start a donkey sanctuary and then in the second part I introduce several of the donkeys that have animated my life,” Pady said.

“They have made my life better.”