It has been a busy week for the Puslinch Kodiaks over the last 8 days, so here’s a quick recap of their up and down week.

On Wednesday the 7th, the Kodiaks traveled down to Niagara for a double header. With many players getting there just before game time, Puslinch came out very slow against the Niagara Snappers in the first game. They fell behind 3-0 in the first inning, before mounting 4 runs of their own in the second inning to take the lead back. Unfortunately their bats turned cold from that point in the game on, and the Snappers bats heated up. The snappers put together 7 runs over the next two innings, including 3 home runs in a row. They ended up tagging on one more run in the bottom of the 5th to complete the mercy, and take the game 11-4 in 5 innings.

The second game saw the Kodiaks take on the Niagara Dawgs, who they had mercied merely a week and a half before that. Unfortunately, this was a much different game then that one. The Puslinch pitchers were unable to find the strike zone all game long, and the Dawgs made them pay for it. The final score ended in a tie, 5-5, with the Dawgs scoring two runs in the bottom of the 7th to come away with the tie.

The following night, the Kodiaks traveled to Milgrove to take on the Jordan Jays for the first time this year. The Puslinch team must have still been feeling the fatigue from the late night in Niagara the night before, as they got a 3 run lead in the 2nd inning, but once again cooled off from that point. Jordan was able to put together 6 runs in the 3rd inning, before adding two more in the 5th, and only giving the Kodiaks 1 run after their initial outburst. The final score ended up being 8-4.

Over the past weekend the Kodiaks traveled to Mitchell to compete in their annual tournament. The Kodiaks started out strong with two win, beating Highland 8-4, and then mounting a comeback in their second game against Fullarton (they were down 8-5 in the 6th, before exploding for 4 runs) and taking the game 9-8.

In their third game they took on St. Paul’s, who stymied the Kodiaks bats, and despite some strong pitching, the Kodiaks fell 4-2, and once again were placed in the B side championships for Sunday. On Sunday the Kodiaks took on Maccabi Canada, a team out of Toronto that had recruited players from all over Ontario, Montreal, and Flordia. Once again the Kodiaks received strong pitching, but found themselves off balance at the plate against a pitcher who was able to pick the corners and change his speed well. A Kyle McCaig home run in the 7th inning was the only offense they were able to muster, and the Kodiaks fell 4-1 and did not advance into the B final.

On Tuesday the 13th, Puslinch got back to league play at home against the Waterdown Hammer for the third time this season. In front of their biggest crowd they’ve seen this year, they got off to a rough start, giving up 4 runs in the first inning, and another run in the second. From that point on they were able to settle down on the defensive side of the ball, and the bats came alive. Puslinch put together 8 runs in 3 innings, including a John Blair home run (his second of the year in league play). They would go on to add another run in the 6th inning, and wound up taking the victory with a 9-6 score. 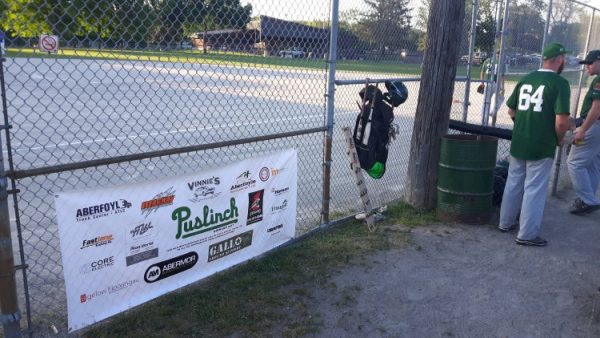