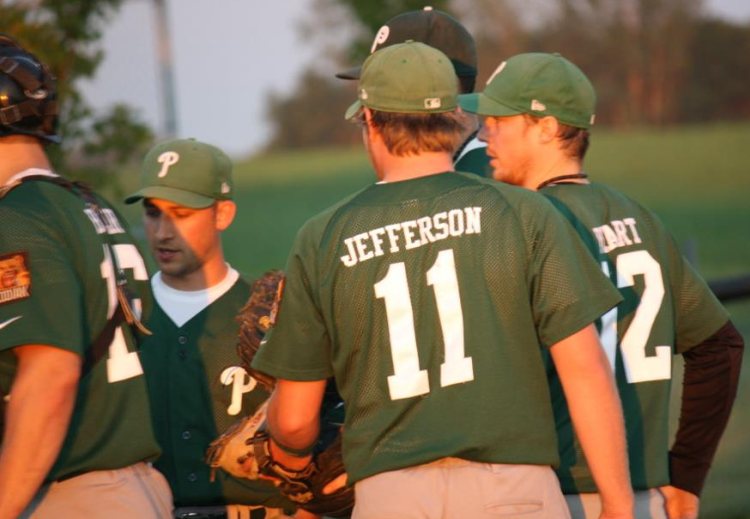 On Tuesday, July 4th, the Puslinch Kodiaks welcomed the Niagara Snappers to Aberfoyle ball diamond for their second and final regular season match-up of the year. The first time the two teams played was in Niagara, and the Snappers took an easy win by a score of 7-0 in five innings.

The Kodiaks were determined to change the result this time, and after giving up a quick two runs in the top of the first, the Kodiaks brought 9 batters to the plate in their half of the inning, and countered with 4 runs of their own. John Blair hit his 5th home run of league play in that inning. The Snappers (two time defending league champions) were not about to go quietly however, and despite Puslinch pitcher Scott Gordon’s best efforts, the Niagara team added another 3 runs in the next two innings. Puslinch once again was able to answer in the bottom of the fourth, on a two RBI triple by Todd Parkinson, giving the lead back to the Kodiaks at 6-5.

Once again the Snappers bats weren’t silenced long, as they managed to add another run in the 5th to tie it back up at 6 a piece. The Kodiaks again managed to grab the lead in the bottom of the 6th, with Todd Parkinson delivering his 3rd RBI of the night. The lead didn’t last long, as the Snappers lead off hitter in the 7th hit a HR off of Scott Gordon to tie the game at 7 (Gordon battled on the mound through all 7 innings against this very good offensive team).

In the bottom of the 7th, again determined not to let this game get away, the Kodiaks rallied with singles from Mike Lajoie, and Matt Haines, and with Todd Parkinson walking after a long battle with the Snappers pitcher. With the bases load, and down to their last out, it was up to David Jefferson to either bring home the winning run, or leave both teams going home with a tie. On the second pitch of the at bat, David connected with the ball sending it deep into centre field for a walk off grand slam. It was David’s first home run of the season, first walk off home run, and first grand slam of his career. Certainly a memorable one for him and the Kodiaks.

This weekend the Kodiaks will be in Ponsonby for the annual Tom Rider Memorial Tournament. Puslinch will start the tournament against an old foe, Rockwood, on Friday night at 7:15. On Saturday they play at 11:00 am against Elmira, and finish Saturday play with a game at 5 pm against the Kitchener Predators.