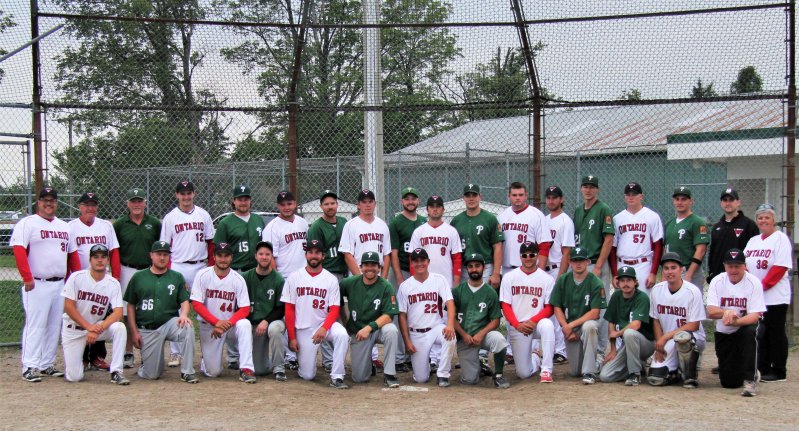 This past Saturday the Puslinch Kodiaks welcomed the Under 22 Team Ontario ball team for a couple of exhibition games. Many fans came out to support both teams, with the total being over 100 spectators during the first game.

In the games themselves, the Ontario team proved why they were considered some of the best players in the nation for their age, as they managed to put up 9 runs in the first four innings against veteran pitcher Scott Gordon. Scott was throwing quite well that game, but the Ontario team showed great restraint in pitches just off the plate, and showed a fantastic ability to square up the ball on swings. For their offensive part, the Kodiaks were stymied for the most part, with a lone run in the 3rd inning, and two more runs in the 5th inning, coming from a two run home run by David Jefferson. The final score was 13-3 for Team Ontario.

In the second game, Troy Cox took the mound, and after getting the first two out, he had some problems closing the inning out (there was an error as well) and Team Ontario scored three runs in the first inning for the second game in a row. It looked like it may be another high scoring defeat at that point, but in the bottom of the first inning, the Kodiaks answered back with 4 runs of their own, with the key hit being a 2 RBI triple by John Blair. Team Ontario answered back with a run of their own in the 2nd inning, with Puslinch answering right back to take a 5-4 lead after 2 innings. The Kodiaks would go on to put runners into scoring position every inning from that point on, but only able to cash in a single run in the 4th inning. Meanwhile, Troy Cox was once again having a strong outing on the mound against a very good hitting team, but couldn’t hold Team Ontario completely off the board, as they took a 7-6 lead after 5 innings. From there, Team Ontario gave Puslinch one of their pitchers too finish the last two innings, as they wanted to get all of their pitchers some work. Team Ontario’s offense would go on to tack on two more runs in the 7th, and win the game 9-6.

The Puslinch ball team would like to thank everyone who came out to watch one or both of the games. Both teams enjoyed playing in front of the crowds, and we hope to have the chance to host events like this in the future. We’d also like to wish the Ontario Team good luck, as they start competition at the 2017 Canada Games in Winnipeg on July 29th. If you’d like to follow their results, they can be found at: https://cg2017.gems.pro/Result/Event_PO_T_T.aspx?Event_GUID=becf70a8-e965-4de4-a3d5-8b8abedc1de7&SetLanguage=en-CA

On Tuesday the 25th of July, the Kodiaks welcomed the Niagara Dawgs to Aberfoyle. Troy Cox took to the mound, and pitched quite well through 4 innings, giving up a solo home run, and an unearned run. The Kodiaks offense however struggled mightily. It seemed that no matter how hard they hit the ball, they couldn’t find any holes, and were completely shut out the entire game. In the fifth inning, the Dawgs started to find their groove at the plate, knocking Troy out of the game after adding another 4 runs. David Jefferson came in from their, but also couldn’t hold the Dawgs off the board, as they added two more runs in the 6th inning, and took the mercy win by a score of 8-0.

The Kodiaks were suppose to get another shot at regrouping the following night, but didn’t get the opportunity as their game in Glen Williams was cancelled due to rain.

They now have two rained out games remained to be played, the one in Glen Williams (most likely to be played next Wednesday), and a make up game at home against the Hamilton Pirates.