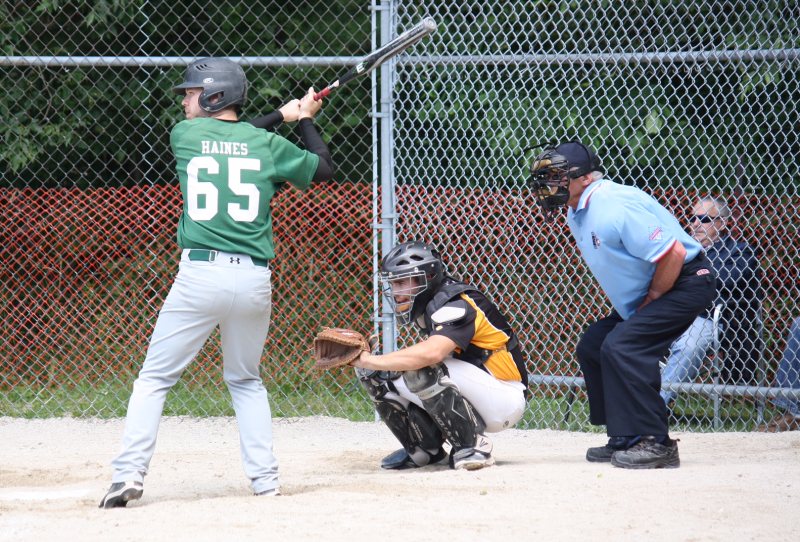 This past weekend the Puslinch Kodiaks traveled to Innerkip to compete in the Ontario West Championships. The Kodiaks had placed second in this tournament last year, and they went into the tournament with hopes of winning it all.

Their first game on Friday night matched them against the Burgessville Bulls. Erik Rasmussen took to the mound for Puslinch, and held the Bulls to just one run over the initial 7 innings. The Kodiaks bats meanwhile could only manage to tally one run of their own in the first 7 innings, which meant the game went into extra innings. With the international tie breaker in place, both teams would start with a runner on second base in any extra inning played. In the 8th, both teams were able to cash in that lead runner, and the game went on to the 9th inning. In the top of the 9th inning, Rasmussen was able to strikeout two batters after a sacrifice bunt, and the Kodiaks were set up to win the game with a single base hit. Brandon Viol came through with that hit in the bottom half of the inning, cashing the runner from second and securing the win for Puslinch.

On Saturday morning the Kodiaks were matched against their former rival from the Inter-county league, the Arthur Merchants. Erik Rasmussen took to the mound once again for the Kodiaks, and he once again would pitch a gem, tossing all 7 innings, giving up just two runs, and striking out 4. The Kodiaks offense was able to add 3 runs over the first 4 innings, and with Rasmussen’s pitching, and some impressive defensive play, hold on for the 3-2 victory.

Their second game on Saturday saw them take on the Kitchener Outlaws, a team Puslinch was all too familiar with over the past ten years, playing them usually at least once a year in tournaments, if not more. The Kodiaks offense came out strong, putting together 4 runs in the first two innings, capitalizing on some bad defense by the Outlaws. Unfortunately, the Outlaws veteran pitcher settled down from there, and despite the Kodiaks consistently getting runners on, they couldn’t add any more runs.

On the mound, Troy Cox got the nod for the Kodiaks, and he threw quite strongly into the 6th inning, giving up 4 runs, while striking out 3. From there, Noah Weir, a pickup from the Puslinch Athletics and Rockwood teams took over on the mound. He also was throwing strong, but unfortunately gave up a run in the 7th after a couple of seeing eye hits, and the Puslinch bats couldn’t answer back in the bottom half of the inning. The final score was 5-4 in favor of the Outlaws.

Their third game on Saturday saw the Kodiaks up against the Burgessville Bulls for the second time in the tournament, this time in an elimination game. After their initial game, the Bulls had put together 2 impressive wins (totaling 20 runs in two games) in order to advance to play the Kodiaks. That red hot offense of the bulls showed up against the Kodiaks, as they were able to put together a 5 run second inning against Puslinch, and starting pitcher Noah Weir. The Kodiaks offense came out of the gate with a run in the 1st inning, but then followed up with two scoreless innings after that. David Jefferson took over on the mound for Noah Weir after the second inning, and pitched the remaining 5 innings, giving up 3 runs spread out over that time. The Kodiaks offense tried to play catch-up the rest of the game, managing to put up 5 runs in the final 4 innings, but with two runners on base in the 7th inning, couldn’t come through in the end. Burgessville took the victory by a score of 8-6, and eliminated Puslinch from the tournament.

The Kodiaks now await their league tournament that will take place on September 8-10 in Niagara Falls. They will play an exhibition game on August 30th against the Glen Williams Ale Stars, in Glen Williams.