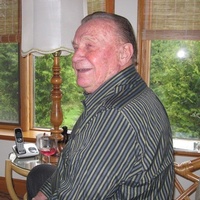 A faithful servant of God, William “Bill” Huiskamp, 92, of Paris, Ontario, passed away peacefully on Friday February 16, 2018 at Telfer Place Retirement Home. Visitation will be held from 10 am to 11 am, a celebration of life will follow at 11 am, on Tuesday February 20, 2018, at the DWAYNE D. BUDGELL Funeral Home, 1105 Rest Acres Road, Paris, Ontario. Rev. Dr. William Koopmans of Hope Christian Reformed Church in Brantford officiating. A private family interment will occur in the spring in the Crown Cemetery in Puslinch, Ontario. Those wishing to sign Bill’s guestbook may do so at:

Bill was born April 28, 1925 in Winterswijk, The Netherlands to Gerrit and Berendina Willemina (Debbink) Huiskamp. He was an officer in the Dutch military but spent most of WWII underground. Like many Dutch after the war, he immigrated to Canada in 1951 where he worked hard and built a secure life for his family. On October 11, 1952 he married the former Johanna (“Hanny”) De Groot in Toronto, Ontario. Bill was employed in the road and building construction industry as a technical surveyor. He and Hanny worked very hard in their newly adopted country and purchased their first home in Scarborough, Ontario in 1952. From there they moved to Clarkson, and then to a century farm in Campbellville in 1966 where Bill completed a major restoration of the farm. In 1973, Bill moved the family once more to Aberfoyle where they enjoyed life in the country for many years. Bill enjoyed imbuing new life into old objects and restoring many artifacts over his lifetime, enjoyed making land ‘green’ and loved to read.