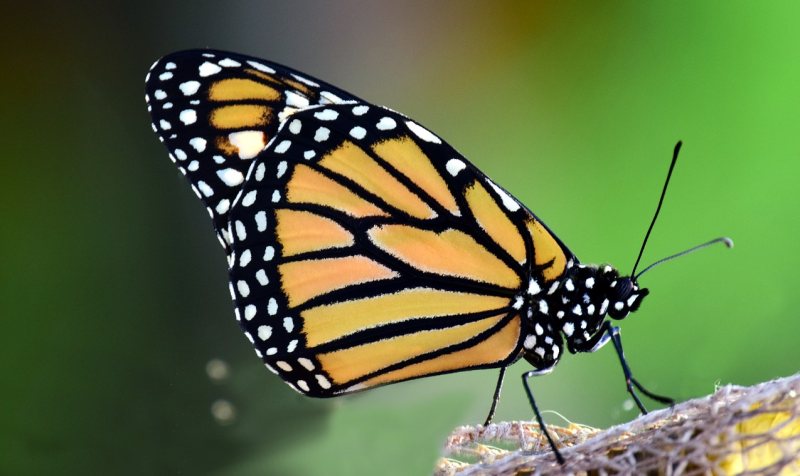 2017, was an interesting summer and fall. Initially, it seemed to be a great year for the Monarch butterfly. Numbers from 2016, seemed to indicate a slight upward trend in population. The wet spring and summer led to abundant crops of milkweed. Of course, with the good is the bad. With record crops of milkweed came record hordes of aphids and milkweed beetles. Milkweed had an almost orange appearance being loaded with so many aphids.

In an attempt to be kind, gardeners were spraying organic soap and water mixtures on the host plants to get rid of the aphids. The working principle is that the soap blocks the breathing tubules of the aphids and they suffocate. Unfortunately, this same principle operates on the Monarch eggs. Entomologists that raise Monarchs will spray soapy water but only after feeding caterpillars are removed. Then the plant is rinsed twice with pure water and the caterpillars returned.

Approaching the fall of 2017, we all had high expectations for the Monarch. Surely with all this abundant milkweed we should have a large volume of butterflies migrating – – a record? But Mother Nature threw in a twist, the warmest fall in 123 years! Initially I wasn’t worried. Maybe a warm fall would reduce migration fatalities and more Monarchs would arrive in Mexico to roost. Unfortunately, according to Cornell university, ‘ warm falls delay migration and late Monarchs don’t get to Mexico as well as the early Monarchs do. ‘ In fact, the critical date for flying is September 15. Past this date and the butterflies usually do not make it to Mexico.

What was truly fascinating was not just a delay in migration behavior but a delay in diopause. Usually the Monarch switches from a breeding butterfly to a diopause state (non breeding) in order to prepare for fall flight. Muscle mass and fat stores increase with diopause. But what we actually witnessed was an extra generation.

This extra generation had scientists worried. Seeing butterflies so far north so late in the year suggested few of these latecomers would reach Mexican wintering grounds. The blame for the unusually warm fall can be placed squarely upon our shoulders. Climatologists say that climate change is likely behind what they are calling the latest Monarch migration ever recorded in eastern North America.

For years, fall butterfly counts have been conducted throughout critical points in the States. The Rockies form a physical barrier to migration and basically divide the Monarchs into 2 distinct populations – Eastern and Western. Everything east of the Rockies migrates to central Mexico. Everything west of the Rockies winters in over 200 sites in California and Baja.

Sad news for the western population – they are not faring well. This group is still in decline and scientists are scrambling to figure out why. One strong factor may have to do with the rampant wild fires and smoke in California when migration was occurring. Recent stats show this population has declined from 1.2 million to just 300,000.

As for our eastern population, the verdict is still out. Scientists will be conducting the Mexico over wintering site counts soon. Some researchers are hoping population numbers will surpass 2015 – 2016 counts due to some of that extra generation actually arriving in Mexico.

So where do we go from here? I’ve rolled up all the suggestions from Cornell and Kansas universities plus the Monarch Joint Venture.

A) Cause : Loss of Milkweed

‘The drop in Monarch butterflies shows how humans have affected the Earth. From 2006 – 2011, 5 to 30% of US grasslands were converted to corn and soybean fields. This is comparable to the deforestation rates in Brazil, Malaysia and Indonesia. Simultaneously farmers have switched to GMO crops that tolerate weed killers. The results of weed killers is the wiping out all milkweed on buffer strips separating fields and roads. By 2012, the Monarch population dropped 58% and now, by 2016, the drop is 81%.’ Dr. Chip Taylor, University of Kansas.

So why am I suggesting a non native milkweed? To combat climate change. Springs are becoming more irregular and earlier. Migrating Monarchs will encounter more incidences of having no food available upon arrival in Ontario. With unsure food and variable flight times in a varying climate, this could spell disaster to this fragile population. Tropical milkweed can be overwintered with your houseplants and can be used as an early larval and food plant while our native milkweeds are still dormant.

We need to use at least 3 to 4 different types of milkweed. Different milkweeds have different growth cycles and this will ensure that there is always milkweed leaves available for hungry caterpillars. A good trio would be tropical, swamp and common milkweeds.

All pollinators are susceptible to pesticides, not just the Monarch. We have to stop the rate of decline of all pollinators. This is vital for securing our food chain and maintaining our environment.

Become organic in your garden practices and be sure to ask your nursery where you buy your milkweed and garden plants if they are pesticide free. Support legislation to ban neonicitinoids. Support organic farmers and local farmers at your farmers markets.

Everyone can reduce their Carbon footprint. Climate change is not just affecting the Monarch but all living things on this Earth. One of the biggest impacts on climate change is to sequester Carbon. Be sure to plant more trees and shrubs. There is lots of information out there on what you can do but, in the end, it is up to you to affect a change and act.

I am hoping everyone has fun gardening with butterflies this year and would love to hear of your successes and stories.