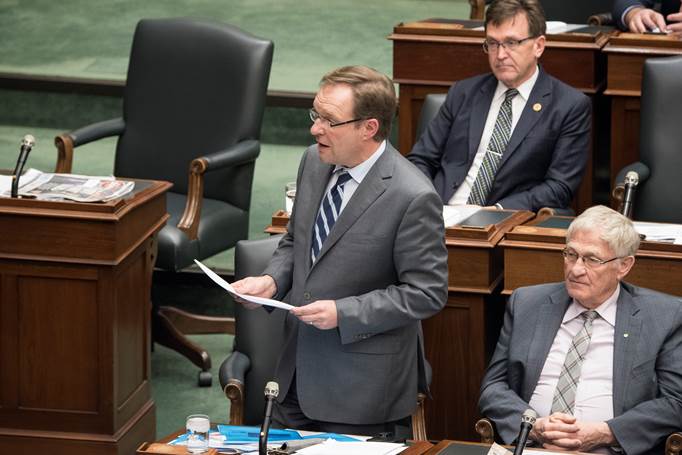 Wellington-Halton Hills MPP Ted Arnott speaking in reply to a Minister’s Statement in the Ontario Legislature on Tuesday March 6th, 2018. In his remarks, he acknowledged that climate change is a fact, that human activity is a significant contributing factor, and that Ontario must do its part to reduce greenhouse gas emissions. He said we need to continue to confront climate change through technology and innovation.

Wellington-Halton Hills MPP Ted Arnott spoke in the Ontario Legislature on Tuesday March 6th, 2018 in reply to a Minister’s Statement on climate change.

Mr. Arnott is the Official Opposition Critic to the Minister of the Environment and Climate Change.

In his comments, Mr. Arnott once again acknowledged that climate change is a fact, that human activity is a significant contributing factor, and that Ontario must do its part to reduce greenhouse gas emissions. He said we need to continue to confront climate change through technology and innovation.

The following is the text of Mr. Arnott’s remarks, taken from Hansard, The Official Report of Debates in the Ontario Legislature:

Mr. Ted Arnott: With this afternoon’s announcements, the Liberal government shows it is becoming more desperate by the day. Today, the government has ministerial statements on climate change and labour law which, not coincidentally, are also the subjects of two government resolutions that we’ve been debating for the past couple of weeks, and which are still on the order paper. The government House leader has tabled these motions and initiated debate on them as time fillers, quite simply because the government has exhausted itself. They have run out of ideas for a legislative agenda. In short, when it comes to any new legislation, they are basically done.

At any time during the debate on the climate change motion that I mentioned, the government could have put up a speaker to say what the Minister of the Environment and Climate Change just said now. So why do we have these statements today by the ministry?

It’s no secret that our party is in the midst of a leadership campaign. Our new leader is scheduled to be announced on March 10. Over the past few weeks, our leadership candidates have been engaged in a vigorous debate on all the issues concerning Ontarians. When our new leader is elected, we will move forward to review all of the issues and offer our solutions for the consideration of the people of Ontario leading up to the June 7 election.

We look forward to March 10, May 9 and June 7 with excitement, and anticipation that the people of Ontario want a change of government. We seek the trust of the people of Ontario, and we ask them to join us to restore trust in the Premier’s office and confidence in Ontario’s future, to bring ability, integrity, competence, experience, sincerity, dedication and compassion back to the government of Ontario.

But this is where we diverge with the government. Unlike the current government, we also know that whatever we do to combat climate change, we need to ensure that Ontario’s families are not hurt and that our businesses remain competitive in a dynamic global economy. We need to protect jobs even as we reduce emissions.

It’s no secret that within our party, there is strong opposition to a carbon tax. Why is that? Under the current government, taxes, fees, hidden taxes, more fees, hydro bills, auto insurance rates and the cost of living generally have skyrocketed because of mismanagement, scandal and non-existent oversight of expenditure. This is why family budgets are stretched to the limit and why people can’t afford another new tax.

While we have made great progress in reducing greenhouse gas emissions, we need to continue to find new ways to reduce emissions. We can do this through technology and innovation, and through the co-operation of our people. Let us challenge our finest minds in science and engineering, in our universities and colleges, in the private and public and non-profit sectors, to bring this issue to the forefront, and through technological advancement, find the solutions that will help us to combat climate change.

Together we can meet this challenge and all of the other challenges as well, as we reach out to the promise of the future.