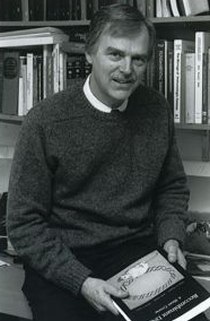 Survived by his wife Dorothy (nee Gibb) of 53 years and his daughter Carla (Peter) of Squamish.

Bruce was born in Perth, Scotland and emigrated to Vancouver in 1955. He graduated from North Vancouver High School in 1958 then attended UBC for two years prior to acceptance into the Ontario Veterinary College in Guelph, Ontario. Bruce graduated in 1965 from the OVC, winning the Winegard medal as the top student. The same year he married Dorothy Ann Gibb, whom he’d met during High School.

After a year of clinical practice in Chilliwack, BC, Bruce and Dorothy moved to New York state where Bruce completed his PhD at Cornell University in 1971 in Veterinary Immunopathology. Two years of post-doctoral work in Bern, Switzerland was followed by an appointment to the Ontario Veterinary College in 1973, as professor of Veterinary Immunomicrobiology.

Bruce had a distinguished career at the University until retiring in 2006, after which he was granted the title University Professor Emeritus honouring his outstanding research record and significant contribution to the training and development of numerous graduate students. In 2015 the OVC Alumni Association named Bruce the Distinguished Sciences Alumnus for his long, productive academic career. Notable, Bruce and his colleague Patricia Shewen developed a highly successful vaccine for Shipping Fever Pneumonia in cattle, called Presponse. This innovation earned a Bronze Trophy in the 1989 Canada Awards for Business Excellence. Bruce also proudly organized the first International Veterinary Symposium, held in 1986 in Guelph, among his many professional achievements.

His interests outside of academia included running, photography, skiing and perhaps most significantly, racing his vintage Alfa Romeos, the latter hobby being avidly embraced by his wife Dorothy as well. The pair spent untold hours travelling to racetracks in the US to pursue their passion.

Given the devastating diagnosis of Parkinson’s Disease in 2007, Bruce defiantly continued both his research and working on his beloved acreage in Puslinch up until his death.

Following Bruce’s wishes, there will be no funeral. A celebration of life will follow at a later date. Arrangements entrusted to the WALL-CUSTANCE FUNERAL HOME & CHAPEL, 519-822-0051 or www.wallcustance.com. In lieu of flowers, donations could be directed to Parkinson Canada or a charity of your choice.

A tree will be planted in memory of Bruce N. H. Wilkie in the Wall-Custance Memorial Forest, University of Guelph Arboretum. Dedication service, Sunday, September 15, 2019 at 2:30 pm.