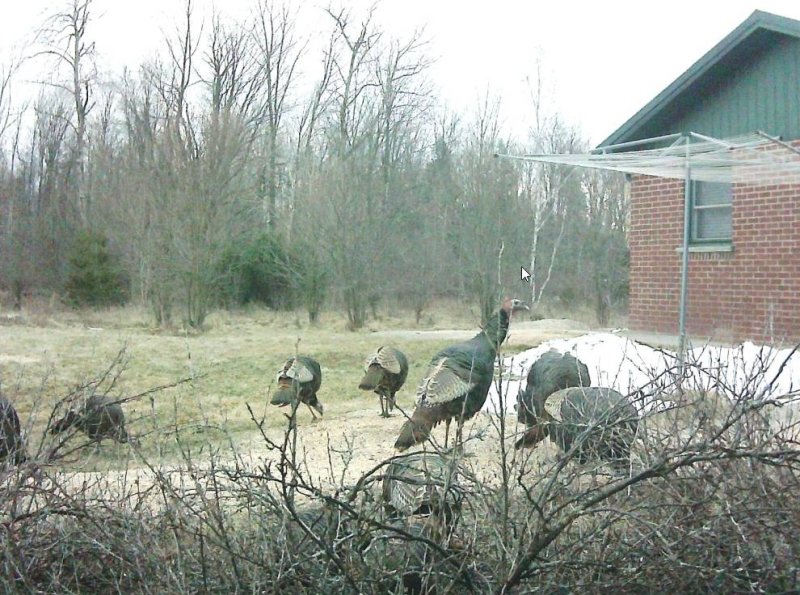 East of Aberfoyle
by Marjorie Clark
Such an icy February as it was, the Wild Turkeys frequented our bird feeding spots for ground feeders. Since the weather has turned milder, the males have begun to practise their awesome display. Perhaps, in a few months, the females will return with a fleet of tiny, downy babies in tow.

Nearly suffering the same fate of extinction as the Passenger Pigeon, the Wild Turkey was wiped out in Canada by hunters and by destruction of its woodland habitat by 1900 and nearly lost in the States by 1930. Thankfully, small pockets of the bird still existed in the United States in 1940, from which it was re-introduced to most of its former range. They began to reappear in Puslinch about 2005. Not surprising, then, that this bird is very wary.

Man is the adult Wild Turkey’s chief predator. Skunks, racoons, coyotes and hawks are the main cause of losses of eggs and poults.

This large bird with long legs, rounded tail and small head on a long, slim neck is the ancestor of domesticated turkeys. The male is about 46 inches long; the female about 37 inches. In weight, it ranges from six to nineteen lbs. The female is smaller, less brightly coloured, and less likely to have a “beard” a flap of tissue dangling from its breast, which looks more like a necktie. Both have iridescent feathers of bronze and green overlaying dark feathers, with white bars on the wings.

The Wild Turkey has excellent vision. It can see in colour, has a 270 degree field of vision and sees three times more clearly than man at his 20/20.

A non-migratory bird, it usually walks or runs but can fly fast for short distances. It can run up to 25 miles per hour. At night, it will roost in trees. Swamps and woods with open clearings are its preferred habitat.

The male is called a tom, the female a hen, the chick a poult and the adolescent a jake.

It gobbles in a similar manner to the domestic variety but there is a wilder tone to it. The Wild Turkey scratches in leaves for its food of nuts, seeds, grains, fruit, grass, insects, salamanders, frogs and snakes.

In spring, the males will call for females. Puffing out their feathers, raising and spreading their tails, drooping their wings and changing their head colour to reddish or blueish, they strut about, shaking their wings and making a humming noise. It is truly a sight worth seeing. The hens will choose the one they judge to be the best progenitor for their chicks.. Hens raise their families on their own.

The female nests in a shallow depression on the ground, which she lines sparsely with grass and leaves. She will lay and incubate 10 to 15 eggs. At night, she will cover the young for several weeks after hatching and she will lead the poults about to find food all summer, communicating with her brood by soft clucking. She may join forces with other hens and their broods, forming a small troop, to search for food, one hen taking the lead and the other following up the rear to ensure the safety of the poults. The poults begin the fly by the end of the first or second week but take several months to reach full size.

The Wild Turkey can live three or four years. Put down some seed on the ground to help them along when next winter gets snowy and watch them to learn about them.