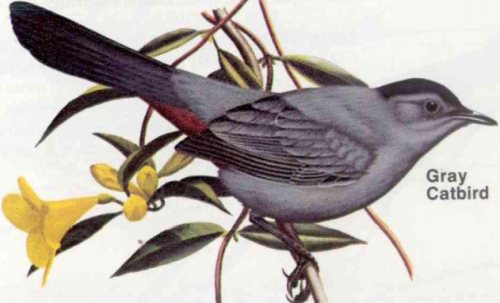 THE CATBIRD IS BACK
by Marjorie Clark

Two days ago, I heard it singing – the Catbird.

When we were youngsters in Morriston, Miss Maggie Rappolt, who lived near us, had a beautiful flower garden beside her house. Behind her small, detached garage, was a large and unruly-looking shrub, possibly a ninebark. Every spring, a pair of Gray Catbirds would make their home there.

We seldom saw the birds, for they stayed hidden in the wild-looking, dense shrub, but we knew when they had returned for another season, as we were greeted with their catlike mewing sound, the alarm call, which gave the bird its name. Its actual song is a delight to hear, a diverse repertoire of melodious, nasal and squeaky disjointed notes and phrases, as if it were asking a question and then, giving the answer. It will also mimic other bird. It belongs to the family Mimidae.

The Audubon Field Guide describes the Catbird as “rather plain but with lots of personality”. A slim bird, about 8½ to 9 inches in length, it is plain dark gray, with a black cap and a long, black tail, often cocked. It flips its tail jauntily, revealing a chestnut patch on the underside of its rump. The female is similar but paler.

The Catbird returns to same spot in Southern Canada or the east or central U.S. to nest year after year. Migrating at night, it also winters in the same place in Florida, the Gulf coast of the Southern U.S. or Panama each year. It tends to stay hidden in low, dense thickets in deciduous woodlands, shrubbery, hedges or swamps. A relative of Mockingbirds and Thrashers, it belongs to genus Dumetella, which means “small thicket”.

The Catbird forages on the ground, flipping leaves aside with its beak to expose insects and berries. These birds are fond of bathing.

Intelligent, the Catbird recognizes, will puncture and eject Cowbird eggs from its nest. Cowbirds lay their eggs in other species nests, where their nestlings are usually larger and flourish to the detriment of the other species young. Between May and August the female Catbird will spend five to six days building a nest. The male may sometimes supply nesting material but that is the extent of his assistance. She will lay three to five beautiful, deep greenish blue eggs and will incubate them for 12 to 15 days. Both parents will feed the young. Nestlings leave the nest in ten to eleven days and the parents will begin a second brood.

This enjoyable bird can live from seven to ten years, if its habitat remains intact and it is not attacked by parasites or predators nor killed by collision with vehicles or buildings. We are happy to have a pair calling our place in Puslinch home these past number of years.