This amazingly large moth showed up on our porch this morning. When its wings are fully opened they can be up to 7 inches across! Luna moths only live for about a week each year as they find a suitable mate and tree on which to lay their eggs – maybe you’ll be lucky enough to spot one around your house this year. 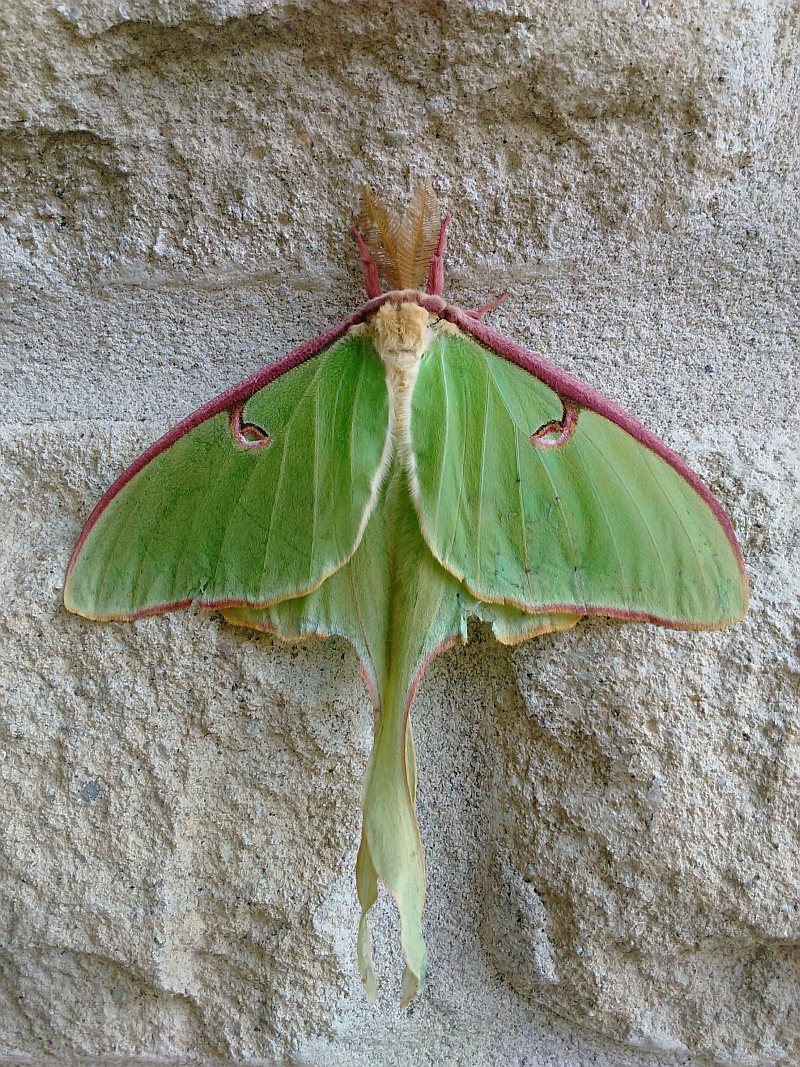 Luna moths are not rare, but are rarely seen due to their very brief (7–10 day) adult lives and nocturnal flying time. As with all giant silk moths, the adults do not eat, and thus are not seen visiting flowers.

The Luna moth (Actias luna) is a Nearctic moth in the family Saturniidae, subfamily Saturniinae, a group commonly known as giant silk moths. It has lime-green colored wings and a white body. The larvae (caterpillars) are also green. Typically, it has a wingspan of roughly 114 mm (4.5 in), but can exceed 178 mm (7.0 in), making it one of the larger moths in North America. Across Canada, it has one generation per year, with the winged adults appearing in late May or early June, whereas farther south it will have two or even three generations per year, the first appearance as early as March in southern parts of the United States.

As defense mechanisms, larvae emit clicks as a warning and also regurgitate intestinal contents, confirmed as having a deterrent effect on a variety of predators. The elongated tails of the hindwings are thought to confuse the echolocation detection used by predatory bats.

Based on the climate in which they live, Luna moths produce different numbers of generations per year. In Canada and northern regions of the United States they are univoltine, meaning one generation per year. Life stages are approximately two weeks as eggs, 6–7 weeks as larvae, nine months as pupae, finishing with one week as winged adults appearing in late May or early June. In the mid-Atlantic states the species is bivoltine, and farther south trivoltine, meaning respectively two and three generations per year. In the central states the first generation appears in April, second in July. Even farther south, first generation appears as early as March, with second and third spaced eight to ten weeks later.

Read more about this amazing creature by clicking HERE.