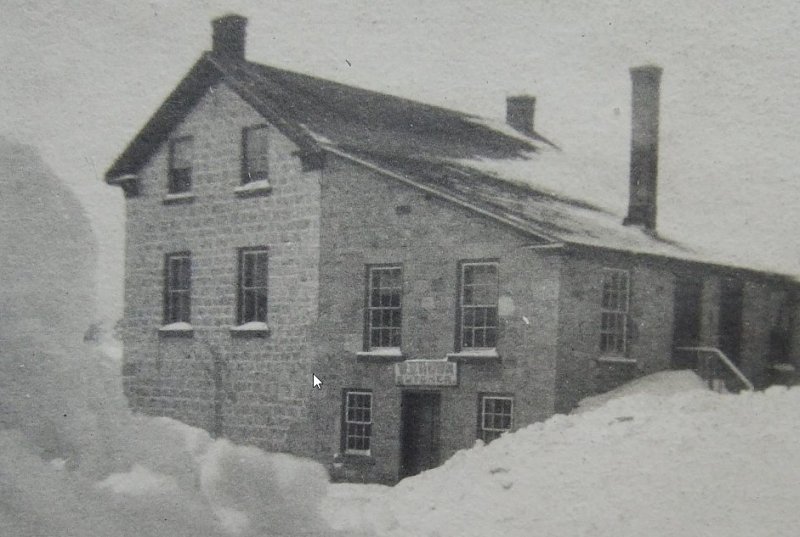 This sturdy, stone structure stood in Morriston for 109 years but all that remains now are photographs.

Bernhard Braun was born on Feb. 20, 1820 in Baiersbronn, Württemberg, Germany to Johannes Jakob Braun and Regina Gaiser, one of 13 children. Five of those children emigrated to North America. Bernhard, his brother, Johannes and his sister, Magdalena made the journey in 1848. They embarked from Hamburg on a ship, which took 48 days to make the crossing.

From New York, they travelled up the Hudson River to Albany, where the Mohawk River intersects with the Hudson, then up the Mohawk River to Rome, New York and across the remainder of the State on the Erie Canal to Buffalo. They crossed the Niagara River into Upper Canada and went to Camden or “The Twenty” as it was known then, where a number of Germans emigrants had settled, and finally north to Morriston. His four siblings travelled onwards to Crediton in Stephen Township, Huron County in 1850- 1851.

At first, Bernhard lived with the Morlock family in Morriston. A shoemaker, he made shoes in the cellar-kitchen, while the Morlock house was being constructed on the above stories. Around 1848-1849, he bought two and one fifth acres on the north-east of the village, which was the south part of lot 30, front concession 8, from Donald Campbell. This became known as “Brown’s Lot”. On this lot was a large, log building, which the Campbells had used as a dwelling and a shop. It then became Bernhard Brown’s home and shoe-making shop.

In 1856, Bernhard had the stone building erected, with the family name and the date inscribed on a stone on the centre top of the front of the building. His shoemaking shop occupied the ground floor and the family lived above. This is the building in the photo taken about 1900, although the picture shows it from the south side and rear.

In 1850, he married Margaretha Boyer and they raised a family of 14 in the village. Several of their offspring remained and operated businesses in Morriston. Matilda Brown married George Weekes, who was a harness-maker in the village for some time. Louisa Brown married George McLean, who was a shoemaker with her father’s business. In the 1920’s, Louisa Weekes and her sister, Kate Provan, ran an ice cream parlour and store in the south side of the ground floor Brown Building and a shoe repair shop in the north side. The ladies were affectionately known in the village as Aunt Lou and Aunt Kate. Their brother, Billy Brown was a butcher in the former frame Morison store building on the south corner of Badenoch Street in the early 1900’s. He stored ice in a small barn behind the Brown Building. Barney Brown Jr. kept a hotel in Morriston. In time, their German name “Braun” was anglicized to the English “Brown”. Bernhardt Brown died in Morriston on Nov. 26, 1897. The building spent a number of years without any commercial activity in the 1930’s.

About 1945, Ken Crow opened an electrical shop called “Crow’s Electric” in the Brown Building and it was quite successful. He employed local men, including Gordon Fielding and Jim Kitchen.

In the night of June 5, 1965 the Brown Building was gutted by fire. The stone walls were knocked down by the Department of Highways, a sad ending for such a substantial, useful, commercial building and a major loss of our architectural heritage.