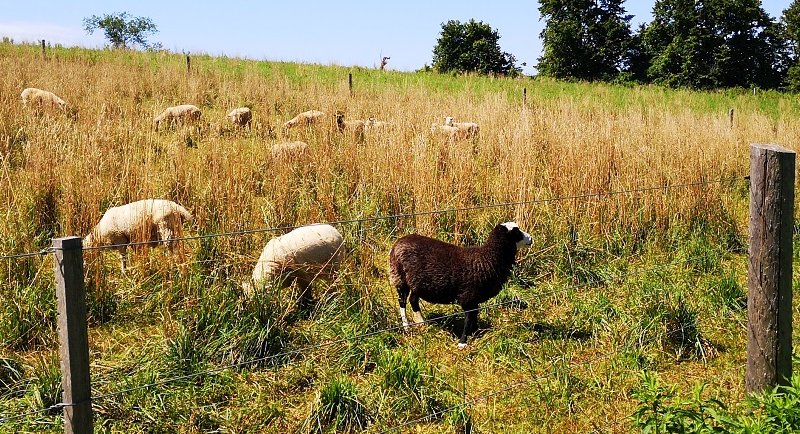 The flock at Valensbrae Sheep Farm is comprised of Dorsets (for meat) and Shetlands (for wool). How we came to acquire Shetland Sheep (pictured here with the dark brown wool) is rather an interesting story.

The Shetland sheep grazing in the Valensbrae fields are descendants of the original sheep from the Shetland Isles, in Scotland. After WWII, the demand for wool dropped with the introduction of synthetics. Sheep farming was almost abandoned on the Isles, and the sheep were left to fend for themselves.

A robust lot, the Shetlands are described as good natured, hardy, thrifty, easy lambers, adaptable and long-lived. Wikipedia states: “The Shetland breed has survived for centuries in difficult conditions and on a poor diet, … and since they retain many of their primitive survival instincts, they tend to be easier to care for than many of the modern breeds.” Rams weigh between 95 to 125 lbs. while a ewe tips the scales at 75 to 100 lbs.

Shetland wool is considered a valuable commodity where the natural wools are often used undyed. Tweed is produced from the coarser Shetland wool, but the Shetland Isles are also known for their multi-coloured knitwear and the finely knitted lace shawls.

Shetland wool colouring is quite unique. There are only 11 main recognized colours that along with patterns, have Shetland dialect names deriving from the Norn language formerly spoken in Shetland and similar to the Nordic languages spoken in Iceland.

How did they get to Canada? Or even Puslinch?

In 1980, Colonel G.D. Dailley (African Lion Safari) was the first person to import Shetland sheep directly from the Isles – thirty-two in all. Twenty eight pregnant ewes and four rams would be the starting crew for a closed flock that would eventually become 300.

Dailley’s daughter-in-law Carole Precious, also a Shepherdess, took over the flock in 2007 moving it to her farm – Chassagne, in Puslinch. Today she produces quality yarn under the label Chassagne Farm Pure Canadian Shetland Wool and is experimenting with interesting blends such as alpaca and silk blended with Shetland wool.

And the Valensbrae connection? We’re getting there.

In 1970, for the Colonel’s 70th birthday, Carole set her mind to knitting a vest from the Shetland wool, sheared from the original flock. It wasn’t without its challenges, as Carole describes on her website of having to straddle the four rams as her mother plucked their wool.

Raw wool has to be cleaned, carded and spun, and that’s where her good friend Tina Stark came in. At that time, Tina was just starting to learn about wool-handling and spinning and this was her first real project. Valensbrae Chief Shepherd Ted Stark, still remembers sitting on the floor of their home surrounded by wool, having been conscripted into carding.

After Tina passed, and Ted decided to launch his career as a shepherd he and his granddaughter headed up to Carole’s farm where they purchased 11 Shetlands that make up the flock today.

“The Shetlands are quite a magnificent breed” stated Ted, “the rams look almost like Rocky Mountain sheep”.

It’s a Puslinch story for the archives!

If you are looking for Shetland wool – in the raw, for carding, spinning, making felt, or stuffing the planks for a log house, Valensbrae Sheep Farm has bags for sale. Each bag of wool is from a single sheep – with its own registered colour no less.