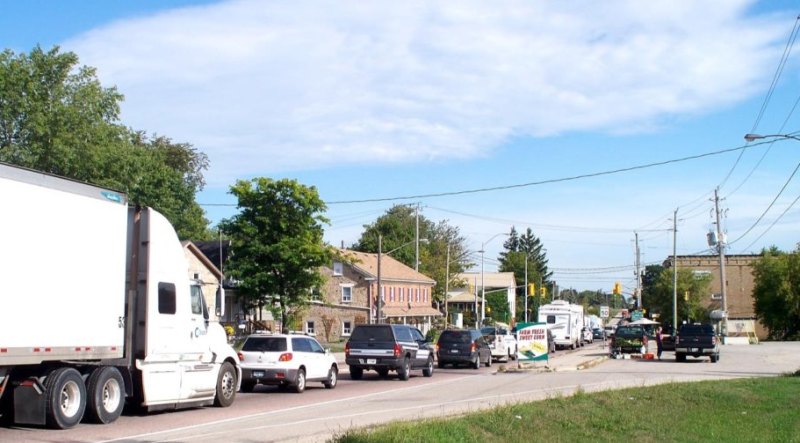 One morning this week, I tuned in the Toronto television station, CP24. Instead of the usual reports of yet another shooting in that city, Cameron Woolley was giving an account of an accident involving the crash of a tractor-trailer into several other vehicles and a heritage building on Highway 10 in the village of Caledon. The owner of the building remarked agitatedly on the daily deluge of traffic through the village. I was reminded again of the situation in Morriston.

It all began long ago. After the construction of the 401 in 1960, Highway 6 became substantially busier. By April 1975, it was readily apparent that there was too much traffic through Morriston. The Morriston Women’s Institute brought up the matter of the unsafe intersection at the Callfas Road/Badenoch St. intersection. In April 1978, the Ministry of Transportation and Communications held information centres in Morriston and in Crieff to acquaint residents with alternative routes, which it had identified for a bypass of Morriston.

Many more information sessions followed. Hopes were raised and dashed numerous time through the years. A truck struck a home south of Westlake’s Confectionary. A resident of the village was killed, while trying to cross the road from the Village Plaza. As a result a stoplight was installed at the Callfas/Badenoch/Highway 6 corner. Another pedestrian was injured, as the corner was and is still dangerous.

In 2009, the website, “The King’s Highway”, described #6 through Morriston as “hopelessly congested over the past decade” and MPP for Halton/Wellington, Ted Arnott, called the congestion around Morriston “the worst traffic jam outside of Toronto”.

Hope flickered again in 2015, when Mayor Dennis Lever and Morriston restauranteur, Will Knetsch, led a mighty effort to push a bypass ahead, which resulted in an approval announcement by then Transportation Minister Stephen Del Duca.

Now, in 2019, the problems have only worsened. Stone heritage buildings along the street shake as the trucks roar by. The horrendous din is extremely unpleasant. It is unsafe to walk upon the sidewalk.

Mayor James Seeley has taken up the mantle and written to Premier Ford. Almost 45 years from when the trouble was first brought to the attention of the authorities, the bypass has still not been constructed.

Attention Ministry of Transportation: Isn’t it time that a bypass was built?