Fusion? Mash-up? We aren’t sure which is the best word to describe the blending of different cultural cuisines, we’re just delighted that cooks such as Chicago chef Mike Sheerin are willing to take chances and then share their success stories.

The recipe we are sharing today, Lamb Gyro Dumplings with Tzatziki is from one of our favourite cookery sites, Food and Drink.

This recipe calls for Gyoza wraps, which was a new word for the Valensbrae Sheep Farm cooks, so we set out to investigate. Just One Cookbook was an excellent resource.

Gyoza is a Japanese form of cookery that likely shares the same history as the Jiaozi or Chinese dumpling. Jiaozi consist of ground meat and vegetable fillings wrapped in thinly rolled pieces of dough and then sealed by pressing the edges together. Finished jiaozi are either boiled, steamed, pan-fried (fondly called potstickers), or deep fried.

The biggest difference between the Japanese gyoza and the Chinese dumpling lies in the cooking method, which is a combination of frying and steaming. Japanese gyozas also tend to be slightly smaller, with thinner skins giving them a crispy texture and bite.

As expected, gyoza fillings also differ favouring ground pork (or in this case ground lamb) over the traditional Chinese dumpling fillings of beef, chicken and fish. Other subtle differences include using regular cabbage over nappa, green onions and chives, ginger, lots of garlic and seasonings such as sake, soy sauce, sesame oil and of course salt and pepper

The order of the day, be creative and feel free to experiment.

At Valensbrae Sheep Farm, we think that lamb is a great choice for a dumplings and it’s only fitting that it’s paired with tzatziki sauce. These dumplings can be prepared in advance and frozen. Making a huge batch of dumplings would make a great family cooking event on a cold blustery day. 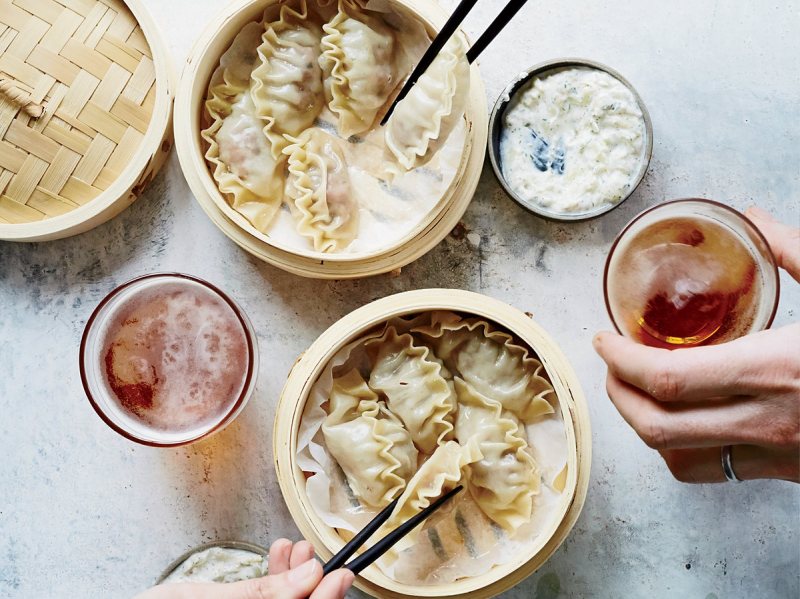 In a medium bowl, whisk the yogurt with the cucumber, lemon zest, lemon juice, the 1T of the chopped dill and the cayenne. Season the tzatziki with salt and pepper. Cover and refrigerate until well chilled, about 20 minutes.

In a large bowl, combine the lamb with the oil, onion powder, garlic powder, mint, oregano, garlic, 2 teaspoons of salt and 1 teaspoon of pepper and mix well.

Working on a flat surface, brush the rims of 5 gyoza wrappers with water and spoon 1 tablespoon of the filling into the center of each. Fold the wrappers over to form half-moons. Seal the edges, pressing out any air, and crimp decoratively.

Transfer the dumplings to a parchment paper–lined baking sheet; keep them covered with a moist paper towel. Repeat with the remaining wrappers and filling.

Fill a wok or large skillet with 2 inches of water and bring to a boil. Working in batches, arrange the dumplings in a double-tiered bamboo steamer lined with parchment paper. Set the steamer over the boiling water, cover and steam the dumplings until the filling is cooked through and firm, 6 to 8 minutes.

Transfer the dumplings to a platter and garnish with chopped dill. Serve with the tzatziki. Uncooked dumplings can be frozen on a parchment-lined baking sheet in a single layer, then transferred to an airtight container and frozen for up to 1 month.