Talk of annexation of part of Puslinch Township began in Guelph in 1964. On January 1, 1966, Guelph gobbled up the Brock Road Section of Puslinch almost entirely, coming south as far as Clair Road. On January 1, 1993, the city took another enormous bite, claiming land south to Maltby Road. The most recent annexation contained the land settled by the first settler in Puslinch. Heritage Guelph has been documenting the property before it is turned into subdivision. The following article was written for our newsletter by P. Brian Skerrett, Chair of Heritage Guelph, who has researched the family extensively.


Whither the Lowarchs:
What happened to the first family of Puslinch Township?

Humphrey Lowarch is well documented as the first settler in Puslinch Township although we should recognize the Lowarch family as the first settlers. Humphrey’s wife Sinah and children Maria and David were partners in the history of Lots 13, Concession 7 and 13, Concession 8 and not enough can be said in this short piece to recognize the brief decade of their lives in Puslinch. Marjorie Clark has written excellent pieces on their settlement but one question remains; how did a family, who simply by being first settlers should be household names in the township, disappear from place and memory after 1837? Even settlers later quoted in oral histories refer vaguely to “the Welshman” and Lowarch himself appears to be more legend than historical figure.

The collective evidence that Humphrey Lowarch was the first settler here in 1828 is well established. And that his death, a few years later, was the first death in the township is also well documented. While some oral accounts place his death as three years after his arrival, his name still appears in the 1833 census so that appears too early. After his daughter Maria married James Warren circa 1832 I note that Warren is listed in the same census data as living on Lowarch’s Concession 8 lot. It seems reasonable to conclude Lowarch was alive in 1833. The likely answer to his date of death comes from an April 1836 petition from Sinah Lowarch to the government to sever her property. It states that “the petitioner’s husband, is dead now better than a year” which would suggest Lowarch probably died in the early months of 1835.

The purpose of that petition was to address a bureaucratic blunder. When Humphrey originally registered the lots, he wasn’t issued two deeds and instead the lots were merged into one property. And as the family was still paying off the land, neither lot was owned outright. Sinah petitioned the government to allow her to sever the single property into two so that she might sell her rights to one lot in order to retain the other. This permission was granted by an Order in Council on May 11, 1837.

Puslinch Township records nothing more of the family after 1837. But other records show they did persevere. Sinah, with her son David, daughter Maria (now Maria Warren), son-in law David Warren, and their daughters Sarah and Asenath (also called Sina, after her grandmother) left for the United States in about 1837 or 1838. Maria and David’s son, David Warren, was born in 1841, likely in the U.S.

Humphrey Lowarch’s wife Sinah and son David both died in 1849, and were likely interred in Gulfport, Illinois. Sara and Sina married into the Donahoo and Crook families.

His death in 1835 occurred before the establishment of any local cemetery so he was buried on his own property, likely Con. 7. We know he was buried in a spot where a subsequent owner, Adam Weir, established an orchard. That orchard, at least in part, was where Heritage House sits today.

Humphrey Lowarch’s remains have never been found or exhumed. Long after his death the legend that his ghost would appear caused settlers to gallop their horses along this part the Brock Road when passing along at night.

In recognition of the family’s role as the first settlers of Puslinch Township, it is hoped that Humphrey Lowarch, his wife Sina and their children, along with other settlers, will be memorialized by the City of Guelph as it pursues development of these lands formerly in Puslinch township.

Another family, which arrived in Puslinch early in our history is that of Johannes Weiss (b.1785) and his wife, Catherina Salome Baumgartner (b. July 4, 1789 in Altenheim, Baden, Germany). 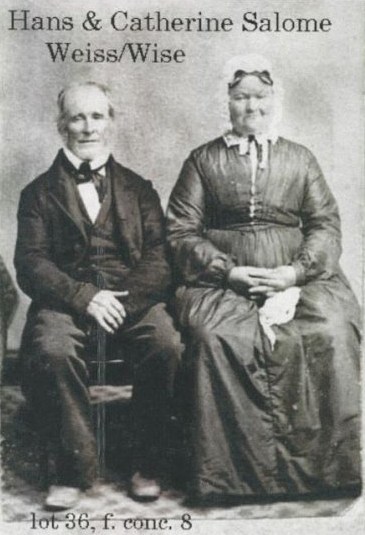 THIS SPRING 2020:
All meetings and events cancelled due to Covid19.
The Archives is closed until further notice.