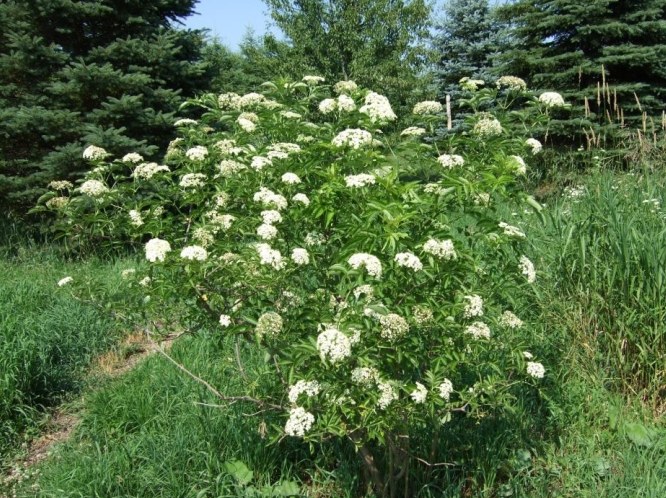 Whenever I gazed out of our kitchen window towards our backyard last week, this lovely flowering shrub met my view. It is the American Elder, commonly know as the Elderberry. Not only does it put forth showy, white clusters of flowers in July, it will also now produce edible fruit in August.

The Elderberry is a native plant, widespread in North America, valued by the First Nations of our land, who ate the berries fresh or preserved dried and made into a sauce. They also employed it as a medicine. Its branches were fashioned into arrow shafts, flutes and whistles and a dye was produced from the purplish-red juice to colour baskets.

The pioneers utilized both berries and leaves in their folk medicines, as well as the juice to dye fabrics.

It is commercially cultivated in parts of the U.S and this was undertaken in south Puslinch during the 1980’s but was evidently not a success, as the plants were ploughed under in their second year.

The Elderberry will grow to about 10 feet tall, with an approximately eight foot wide spread. It prefers moist sites with indirect sunlight and will often be found in open spots in tall deciduous forests. It may flower and fruit in two to three years but the bushes are often short-lived. It will reach full size in three to four years.

This plant is especially good for stabilizing creek and river banks. The berries provide food for various wildlife, including many species of birds, squirrels and deer.

High in vitamin C, elderberries can be enjoyed by humans as juice, jam, wine and most delightfully of all, make a delicious pie. Remember to add about 5 tablespoons of flour to the sugar before mixing with the berries, as there will be a lot of juice to absorb. 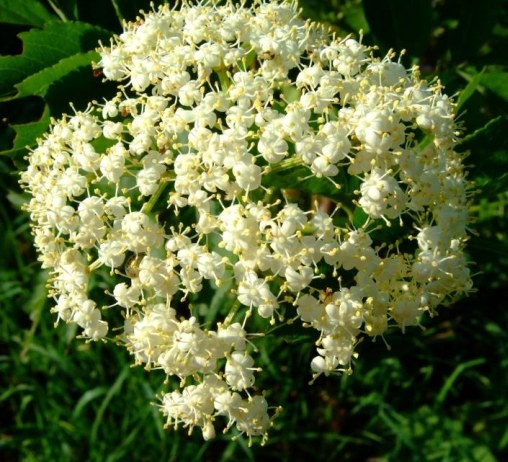