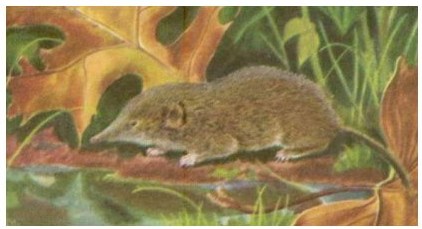 Illustration from A Golden Nature Guide to Mammals, 1955

SEEN IN PUSLINCH
by Marjorie Clark

Mee-o, apparently an apartment dweller in his previous life, has taken full advantage of living in the country of Puslinch since his arrival two years ago. Possessive of his territory, he patrols the perimeters to chase off intruding cats. As well, he has honed his hunting skills to perfection, carrying home mice, moles and birds. Any of these, which could be rescued from him, have been and returned to the wild.

Uncharacteristically, one day in November, Mee-o rushed to the house door and stood to be let in. Once inside the kitchen, to my surprise, he carefully set a tiny animal on the floor. So small it was, that it had not been visible in his mouth. I noted that it was not alive and that is was too diminutive for a mouse or mole.

Indeed, it was the smallest animal in our area, an American Pygmy Shrew. Measuring less than 2 inches in length, 1/3 of which is its tail and weighing in at less than an ounce, this is an astoundingly tiny mammal. It inhabits both deciduous and coniferous forests, clearings and swamps in Canada, anywhere south of the tundra. Because it is difficult to sight or capture, little is known about it for certain.

Like the mole, the shrew has a fine, thick coat of short, soft, grey fur. Its head is narrow, with a pointed nose, featuring long whiskers. Its eyes are barely visible, surrounded by fur. The Pygmy Shrew will molt twice a year, in the late summer and again in spring.

Each occupies a small territory, where it hunts through moss, fallen leaves, roots, stumps and moist soil, using other animal’s and insect’s tunnels. Its metabolism rate is extremely high; it must eat almost continually. Therefore, it alternates between hunting trips of about 3 minutes and short rest periods through day and night. Its diet is entirely protein – insects and insect larvae.

Communication consists of sharp squeaks, soft purrs and high-pitched whistles but researchers are uncertain of the meaning of these sounds. When frightened or agitated, it will produce a musky odour from a gland in its flank.

Definite information about its reproduction is scant. The speculation is that mating season is June through August, with a possible gestation of 18 days. It is thought that they produce three to eight young in one litter a year.

Also undetermined is the lifespan of the shrew but it is likely to be less than two years. Its enemies are snakes, hawks and not surpringly, domestic cats, like Mee-o.

There exists such a dearth of knowledge about this amazing, wee creature in our midst, that here is an open field of study for any budding zoologist.