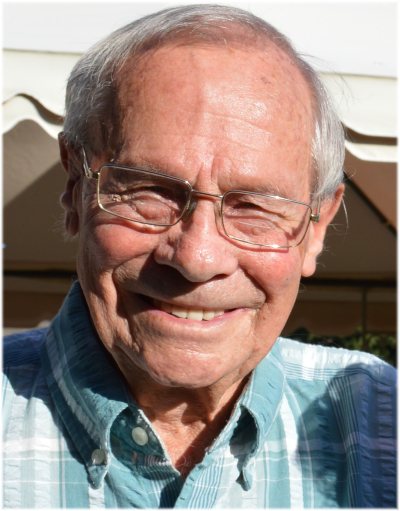 Norm died very peacefully at his home in Arkell, in his 90th year. He follows his wife, Gwen, who passed away in July 2019.

Norm grew up on dairy farms, first at his grandparents’ Brock Road Dairy on Gordon St., and later at his parents’ dairy farm in Arkell. In his teens (late 1940s), Norm delivered milk around Guelph by horse and wagon, for Victoria Dairy. After marrying Gwen in 1953, he turned to building motors at Leland Electric for several years, and then became part of the work crew at U of G’s Arkell Research Station, where he always liked to say, “I could drive my snowmobile to work in the winter.” He retired from the U of G in 1993.

Playing softball was Norm’s passion in his youth (shortstop for the Arkell team); there were many tournaments and parties with his teammates from the area who will fondly remember these times. Norm was one of the Blue Jays biggest fans, as well as an avid Toronto Maple Leaf fan.

After spending early married life in Guelph, a lot was severed from the family farm in Arkell in the 1960s and a new house built by his father served as their little nest for the next 50 years, raising their family of four and watching it grow. It later became situated at the corner of Boreham Drive when a new subdivision swung through.

Norm is now with his sweetheart.

Cremation has taken place and interment will follow at Farnham Cemetery. A celebration of his life will be held in the summer for the family. Arrangements entrusted to the WALL-CUSTANCE FUNERAL HOME & CHAPEL, 519-822-0051 / www.wallcustance.com

Memorial donations can be made to the Heart and Stroke Foundation and would be appreciated.

A tree will be planted in memory of Norman H. Boreham in the Wall-Custance Memorial Forest.