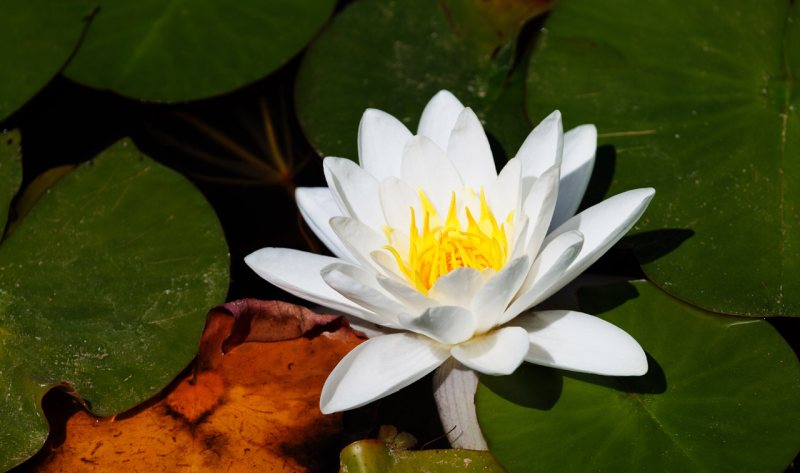 For some time, the question has been asking about the vegetation, which now covers the surface of Morriston Pond. Just what is it and is it an invasive alien? It is aggressive, as can be deduced by its spread over the entire pond surface within about four years. From the 1950’s until recently, the pond had been quite clear.

Happily, the Halton Conservation Authority reported that it is a native to this area and identified it as White Water Lily. There are benefits to this plant. The flowers are lovely and have a long flowering season. As well, the lily pads provide shade for the pond, reducing the water temperature, and cover for fish. The floating vines have, thus far, not interfered with skating. Morriston Pond was a popular spot last winter.

Accompanying the water lilies on Morriston Pond is Duckweed, also called Water Lentil. This plant is also a native, floating on or just below the surface of still, fresh water bodies. It inhibits the growth of algae and shades the water. Duckweed is a high protein food for fish and waterfowl, such as Mallards, Wood Ducks and Canada Geese.

Adding to all of this beauty, have you noticed the Swans? For a few years, the Swans on the pond were domesticated, kept by residents living near the pond. However, the Swans were very defensive of their cygnets with people and the the cygnets fell victim to the large population of Snapping Turtles resident in the pond, proving it an unfavourable breeding habitat. Now, the pond is visited by a group of Swans. It began as a pair and has increased to a flock of fourteen birds this spring. Can anyone identify what species of Swans these are?

If you are out and about, take a walk or a short drive back Callfas Road to enjoy our natural gem in Morriston.