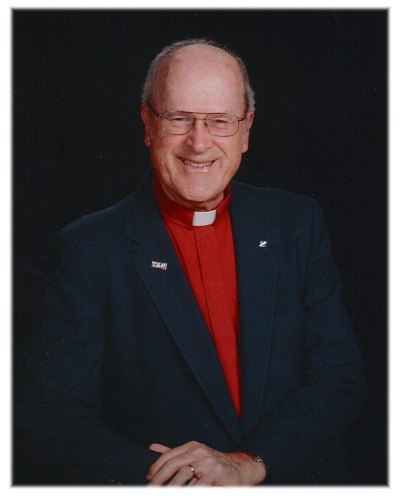 In his youth, Bob was active in the Presbyterian Young People’s Society at St. Enoch Presbyterian Church in Hamilton – now merged with Eastmount Presbyterian to form Trinity Presbyterian Church. This is where he met the love of his life, Maureen. It was in PYPS where his growing faith in Jesus Christ and his keen interest as a student of scripture was first noticed by church leadership. St. Enoch’s Minister at the time, Rev. Dr. Mariano Di Gangi, asked him if he had considered going into the Ministry – he hadn’t, but he began to, with Di Gangi as his mentor. Bob received the Lord’s call while at Camp Iona in Bala, Ontario – where he would later spend a few years as Camp Director.

Bob’s undergraduate degree was in Chemistry from McMaster University, Hamilton. He then went on to Knox College, at the University of Toronto for Theology. He served as a student pastor at St. Enoch, Hamilton, followed by Glebe Presbyterian Church, Toronto. After his ordination in 1964, his first Call was to St. Andrew’s, Assiniboia, Saskatchewan where he served for three years. He was then called to St. Andrew’s, Arthur and Gordonville, back in Ontario, where he spent the next 8 ½ years. His next call was to be 1 of 14 people interviewed to serve in a brand new type of ministry in Puslinch as Resident Director of Crieff Hills Community Retreat and Conference Centre – a 250 acre estate owned by the Presbyterian Church in Canada. He was the unanimous choice for the position. During this time at Crieff, Bob was also a member of the North American Retreat Directors Association, and a representative with the World Council of Churches. This work saw him travel far and wide – throughout the United States, Japan, Europe and Africa. As an example of his well-known tireless energy, during this time he was also elected and served 11 years as trustee for the Wellington County Public School Board. He was Chairman of that Board for two of those years.

In 1999, after 24 years of dedication and service, Bob left a very successful ministry at Crieff that boasted a growing complement of staff and volunteers and a rich offering of lay leadership programs. During that year, a Minute of Appreciation was adopted by the 125th General Assembly of the Presbyterian Church in Canada providing the acknowledgement that “by the grace of God, Crieff Hills is undoubtedly ‘the place that Bob built.’” After leaving Crieff, he established his own lay leadership training service called Laòs Ministries. He also spent the next 10 years as Interim Minister to 5 congregations in transition, seeking new guidance or coming to terms with the changing needs of their congregations. At the age of 60, Bob studied for and successfully completed his Doctorate of Ministry at McMaster University. After full retirement, he spent several years as Minister in Association at St. Andrew’s Presbyterian Church, Guelph, helping wherever he could continue to serve.

Besides being a gifted preacher, his second love was singing. Relegated to the “crows” in Kindergarten, he proved them wrong as the years passed by, becoming a voice remembered and often celebrated in many places he served. Besides church choirs, he sang in several Gilbert and Sullivan musicals while at Delta Secondary School and McMaster University, and in later years for Royal City Musical Productions. His musical gift added much to the many programs at Crieff, as well as to his church ministry. His solos and his duets with Maureen were always eagerly anticipated. On top of all this, during the late 70’s and early 80’s, he was lead singer and occasional bassist of a Presbyterian musical group called “The Lost and Found Department”, made up of 7 Presbyterian ministers who toured Ontario, Western and Eastern Canada, and Jamaica. Their theme song was “Amazing Grace”. Later in life, Doctor Bob kept himself busy musically as a member of several men’s choruses around Southern Ontario as well as the St. Andrew’s Guelph church choir. Coming to barbershop quartet singing somewhat later in life, over the past 30 years Bob was a proud member of the Royal City Ambassadors, and later the Tri-City Gospel Chorus, as well as the bass in an award-winning barbershop quartet – Heartland Express. Going to the Ambassadors’ annual shows and regular sing-outs was a family treat.

Bob’s love of music and singing remained throughout his life. It had a profound influence on how he approached life, his ministry, and especially on his children, nieces, nephews and grandchildren. Even during the pandemic, he did an impromptu virtual Christmas concert with his daughter-in-law Katie accompanying him, for the family on Zoom. Bob’s voice in life was rich and powerful. It will long be remembered in many avenues, from heads-turning while singing O Canada in the stands at his beloved Hamilton Tiger-Cats games with his family, to the absolute stirring beauty of his interpretation of O Holy Night at countless candlelit Christmas Eve services. His life and his service to God and his community was both heard and felt. He will be deeply missed.

A private service to celebrate the life of one of God’s most committed servants, the Reverend Doctor Bob Spencer, will be held at St. Andrew’s Presbyterian Church, Guelph, on Saturday July 3, 2021 at 10:30 a.m. Guests may attend remotely by clicking this link. This will be followed by a private family interment at Memory Gardens, Breslau. Arrangements entrusted to the WALL-CUSTANCE FUNERAL HOME & CHAPEL, 519-822-0051.

Donations in memory of Doctor Bob to the work and mission of Crieff Hills Retreat and Conference Centre or St. Andrew’s Presbyterian Church, will be most welcome.

A tree will be planted in memory of Robert C. (Bob) Spencer in the Wall-Custance Memorial Forest.