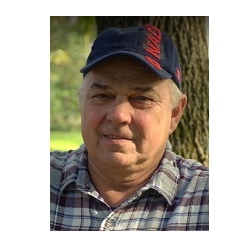 Al was born to Robert Kennedy (RK) (1925-2017) and Lois Riddell (nee McPhee, 1930- 2016) in Galt, Ontario. The family resided in Puslinch township and grew to include Wendy (1973), Chris (Tammy), Jamie (Cathy), and Lisa. Al would tell stories of time spent with his grandparents on the farm, helping in the garden. Al had an affinity with animals; faithful dogs, robust livestock, equestrian training and competitions. He loved to tinker with almost anything that had a motor and spent time doing stock car derbies.

Al went to school in Badenoch (now Badenoch Community Centre) and was involved with sports within the community. He later went to high school at GCVI in Guelph. Al could be seen zipping around Puslinch and Guelph in his red 1968 Mercury Cyclone where he caught the eye of Liz Viol, and as they say, the rest was history. Al and Liz married at Duff’s Presbyterian Church (1973). They lived for a while with RK, then branched off to a farm in Puslinch Township. Daughters Allison and Maggie (Brent Kurtz) were born and son Michael. The family moved to Drayton to continue their farming journey. Sons Gary and Bryan were born, and daughter Ashley.

Al’s love of baseball and hockey followed him everywhere he went. He coached in the minor hockey system for many years, lost teeth in the beer league and continued to play baseball for many years. The love of sport was been passed to his children with fond memories of playing ball in the back yard. Al spent many years with Kinsmen and enjoyed the community connectedness.

The family moved to Palmerston, a few places in between, Morriston, Puslinch, then Al and Liz retired to the garden suite in Ariss. Al loved to work with his hands and his repertoire of skills were vast. Some of his work included furniture building, car and tractor restoration, welding and metal work. Anything with a motor could be brought to Al to have new life breathed into it. Al could always be found in his shed with good music and cold beer. The shed was a gathering place and gatherings ranged from the yearly pig roast in Drayton to significant birthday celebrations in Ariss.

Alan’s 13 grandchildren, Ethan (Allison), Robert, Richard, Derek, Blair, Daniel (2010) (Maggie), Cameron, Meg (Michael), Layton (Gary), Alexis, Jaxson and Bryanna (Bryan) and Rose (Ashley) were an important part of his life. At family gatherings he would always count the grandchildren and proclaim that he had the best family in the world.

At the heart of it all, Al had very simple needs and was a very gentle soul. He was not one for fuss or bother. He always had projects on the go and was a busy man. In social settings he made sure that people felt welcome and was inclusive of everyone. He was never lost for words and enjoyed telling a story or two. He worked hard every single day of his life and did not like to sit still for too long. We will remember him for his potatoes and corn, his secret love of hanging flower baskets, visiting time in the shed and a variety of projects that we will finish for him. We will miss his laugh, his steadfastness and most of all, his love.

The family would like to express sincere thanks to the Centre Wellington Emergency Services and Groves Memorial Hospital.

It is the family’s intent to have a graveside service at Crown Cemetery, 302-312 Brock Rd S, Guelph, on November 6, 2021 at 11:00. A celebration of life open house will be on November 6 from 1-5:00 pm at Badenoch Community Centre, 4217 Watson Rd S, Puslinch. In lieu of flowers, please consider a donation to Knox-Elora Presbyterian Church.