In May 1865, the Hamilton Times reported the possible discovery of oil on the property of Robert Forbes in Badenoch. The Township was digging a three foot deep ditch to drain a swamp, when the substance was found. This caused a flurry of excitement, with people from surrounding cities carrying off pails of the fluid for examination.

A group of businessmen from Guelph organized a company and negotiated a contract with Robert Forbes and adjacent landowners, Duncan Martin and Sandy MacEdward. Angus Martin of Badenoch, water well-digger and drainage specialist, was to bore a test hole on the border line of lot 31 and lot 32, front of concession 10, near where the Badenoch Community Centre now stands. The company sold shares at $10. each, to an issue of $4,000. It was rumoured that Thomas McCrae, on a farm to the south, on the Puslinch/Flamborough border, was offered $20,000 for 200 acres, an enormous amount at that time. It was a losing venture.

In June 1914, Alex Neubauer said that an investment syndicate, with capital of $40,000, had been formed to drill on his farm, lot 7, concession 4, Puslinch. Morgan Crewson of Milton, who was to be in charge of the drilling, sent a train car of machinery to the Canadian Pacific Railway Station in Hespeler, from where it was teamed to the Neubauer farm. The first hole was unsuccessful. By January 1916, according to the Berlin News Record, well #2 had reached a depth of 2,500 feet, when they were forced to spend 10 days recovering a broken drill from the bottom. Toronto World reported in April 1920, that the drilling had ceased, the wells had been capped and the derricks removed.

However, this project must have restarted. On the evening of June 20, 1928, according the the Hespeler Herald, hundreds of people flocked to the Neubauer well, after reports of oil being struck. Doug MacRobbie states that five wells were drilled on this property. This, too, was a losing proposition.

In the late 1950’s, oil speculators negotiated with people around Morriston. One such well operated on Charlton “Doc” Telfer’s farm, on the edge of the northern portion of Morriston Pond. Historian, Stephen Thorning, stated in a Jan. 11, 1999 article in his regular column, “Valuing Our History” in the Wellington Advertiser, that the driller was Jonsmith Mines Ltd., based in Toronto. “Doc” Telfer died on Dec. 10, 1958. When this photo was taken by Mildred Clark of Morriston, the well had already been abandoned as unproductive. 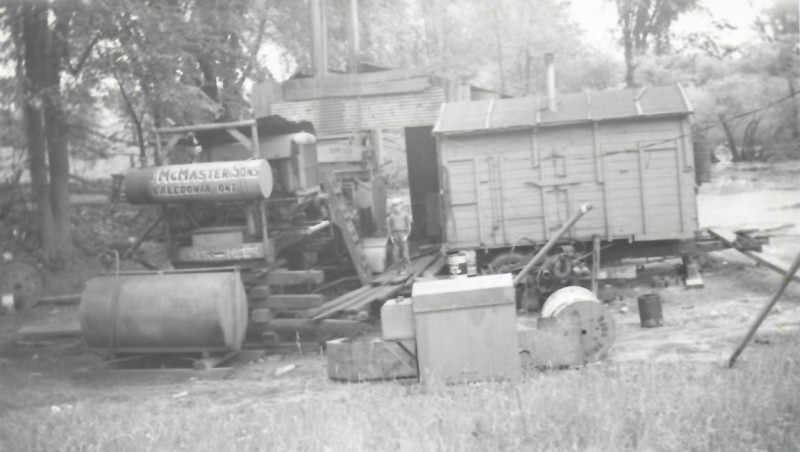 In April 1970, Baden Petroleum Ltd. of Chatham, ON, approached Puslinch Council, seeking to drill in a gravel pit owned by the Township but the township’s mining boom was now focused on gravel.